The traditional worldviews of the Ukrainian people are  a system of beliefs, knowledge, and ideas about both the material and spiritual world, its origin, structure, and the place of man within it. The worldview of common people is sometimes referred to as folk philosophy, although in essence, it represents a naive conception of the world. It is based on multi-stage and often contradictory mythological and religious beliefs saturated with magical ideas. These worldviews permeated various spheres of life in traditional society: folklore, folk art, folk construction, annual and family holidays, folk medicine, and folk knowledge about the environment (folk meteorology, astronomy, medicine, zoology), to name a few.

The foundations of traditional Ukrainian worldviews were established on the practise of  agrarian magic and ancestral worship combined with the significant influence of Christianity and its respective interpretation. It took on a unique character in individual households where it was influenced by vernacular culture, beliefs, and religious practices. As a whole, these practices are scientifically referred to as folk or everyday Orthodoxy. Magical practices and the mythological belief in supernatural beings coexisted with belief in Christian miracles and the miraculous power of holy relics, healing springs, and icons, and belief in the immortal soul and God's punishment. 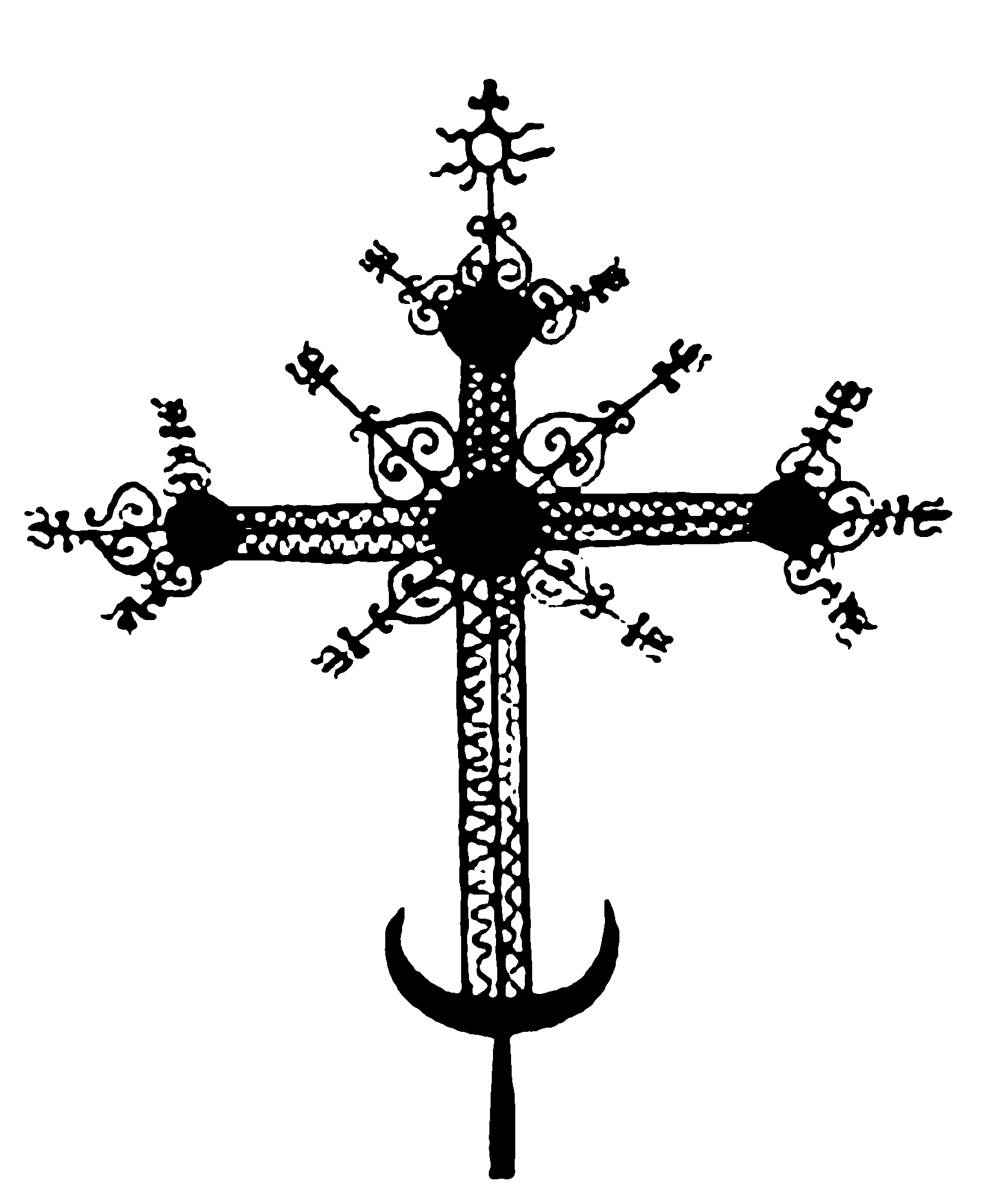 S. Vergovskyi. Cross atop the central dome of St. Michael’s Church. The cross contains solar signs such as the moon, the sun, and other figures and images that symbolise world creation and the universe such as spirals, waves, and plants. Dorogynka, Fastiv raion, 1600. Museum of Folk Architecture and Life in Kyiv, Collection of monuments of history and culture of Ukraine: Encyclopedic edition. - Book. 1: Kyiv. - P. 2: M – S., 2004. - P. 585–1216.

Since Ukrainians were mainly agricultural people, the cult of fertility, fecundity, and vegetation comprised a significant place in traditional worldviews. The fertility cult is most explicitly represented through calendrical rituals. Ancestral worship comprised another important component of Ukrainian worldviews. Honouring ancestors accompanies all the most important holidays and events of both familial and calendrical cycles. Thus, by their nature, worldviews are a mosaic of multi-stage beliefs, mythology, ideological views, and religion.

The most important elements and objects for Ukrainians were earth, water, sky, fire, sun, grain, and bread. They were considered universal, eternal, and ‘sacred’ world elements in the system of mythological ideas. In folk narratives, they are often mentioned as 'holy land', 'holy water', 'holy fire', or 'holy bread'. In Ukrainian mythology, archaic ideas about the four elements have not reached the level of anthropomorphisation. Although they were considered alive, may feel pain, or resentment, they did not receive a human appearance, as occurred, for example, in ancient Greek or ancient Egyptian mythology. These main substances (water, fire, earth) were used in purifying magic and folk medicine, as well as in many calendrical and familial rituals. Nepochata ('unstarted'), or Jordanian water (from the Feast of Jordan), had special purification functions. Individuals often took land with them as a talisman on long journeys. During wedding ceremonies, it was customary to lead the newlyweds through a fire. It was meant to cleanse the young couple of evil spirits and spells. 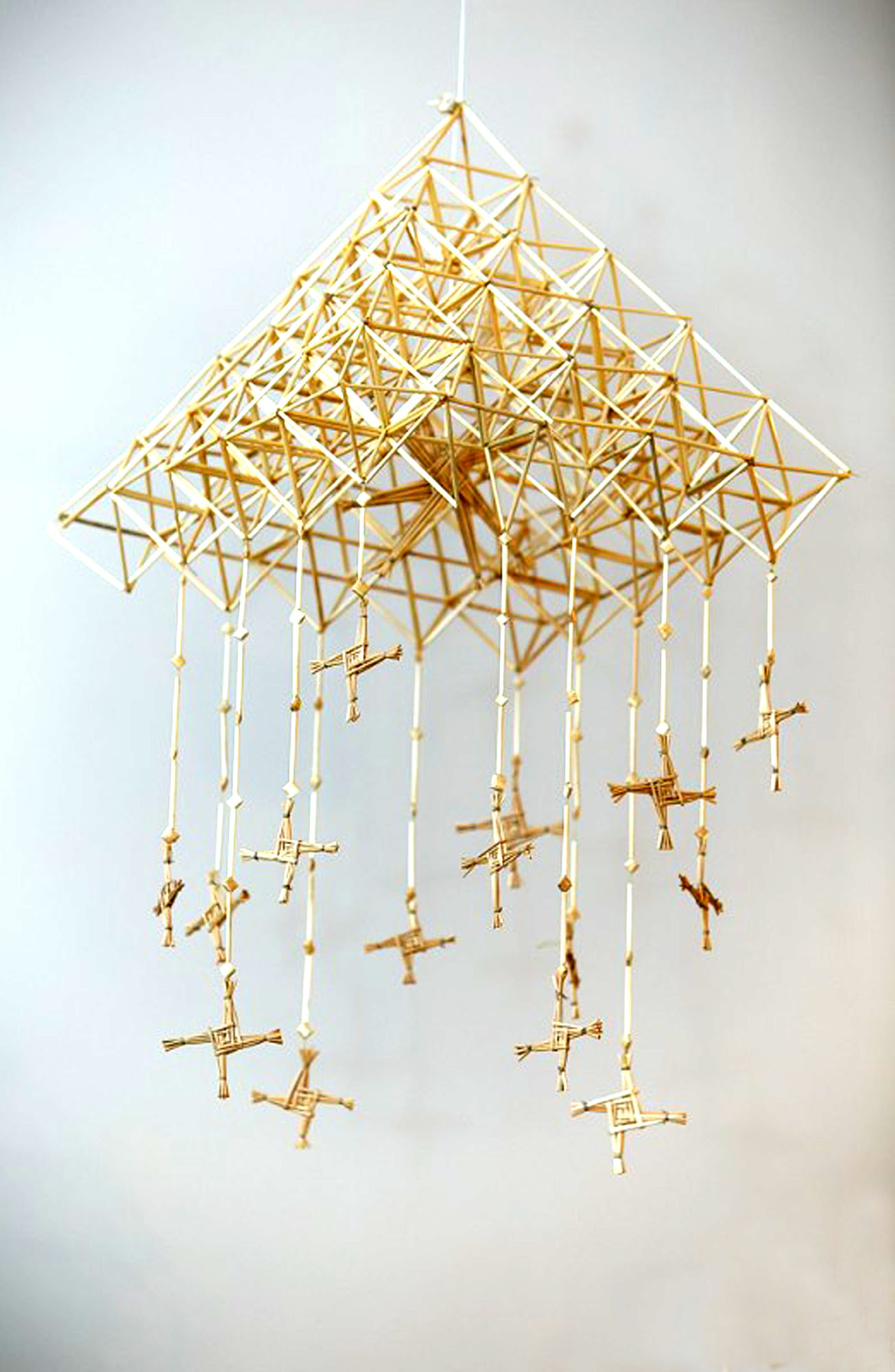 Christmas Spider that represents a model of the universe. Exposition of the Ivan Honchar Museum, Kyiv. https://honchar.org.ua/p/rizdvyani-pavuky-z-solomy/

Ideas and legends about the origin and structure of the world are significant components of the folkworldview system. These beliefs were greatly influenced by Christian beliefs. Ukrainians imagined that the earth was mostly flat with a ‘navel’ in the centre (in Jerusalem or Kyiv). In Ukrainian carols, narratives of creation have been preserved in poetic form: as a rule, the creation of the world occurred at sea and with a tree. Birds (doves) dove to the bottom of the sea to retrieve  golden granules of sand from which land was formed. The sky and luminaries were formed from blue or gold stones. The afterlife held a special place in the universe. According to popular belief, people fall into the ‘other world’ after death — a place similar to the world of the living. The afterlife was considered to be located either in the sky or at the navel of the Earth, but most often underground. It was believed that the dead in that world lived the same life as the living. Sometimes ‘the other world’ was called ‘vyrii’ or ‘irii’. In the ‘vyrii’, the souls of unborn children are kept. Birds that flew to warmer lands were especially revered as there was a belief that they could bring news from the dead (swallows), or they could bring a child (storks). During funeral rites, it was very important to close the door and gate quickly so that good energy would not leave the yard. During childbirth, on the contrary, all the doors and windows were kept open. During difficult births, the priest was asked to open the door to the church. These actions were intended to help ‘clear’ the way for the child and its soul who were coming from ‘vyrii’ to this world.

Another important component of the people's worldview was the belief in supernatural beings, both of demonic or semi - demonic origin, and in people who had supernatural abilities. This entire complex of beliefs and ideas is typically allocated to the system of ‘lower mythology’ or ‘folk demonology’. 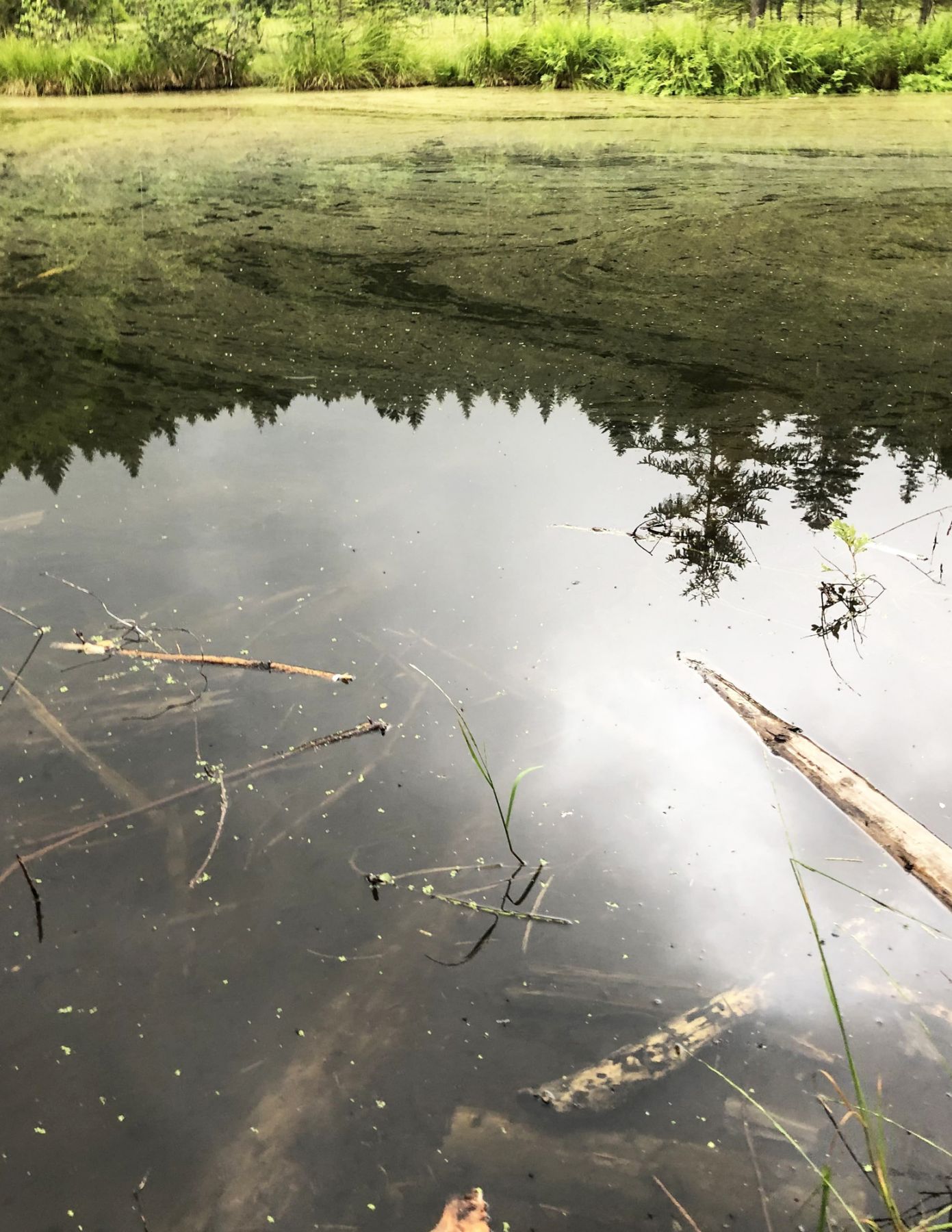 O. Soboleva. Mertve Lake, Skole raion , Lviv oblast . According to legend, this lake is associated with an evil spirit. The exact depth of the reservoir is unknown

A distinct feature of traditional Ukrainian mythological characters was their resemblance to humans. Most characters had a human appearance or could acquire it. Although they are not derived from humans, some characters appeared as personified images of various phenomena, such as diseases (Cholera, Plague, Fever), days of the week (Friday, Sunday, Wednesday), and the phenomena of human life (Death, Soul, Misery, Fate) .Personified characters in Ukrainian mythology were, in particular, vodianyk, lisovyk, vykhor, and vitrianytsia (povitrulia).

Ukrainians held many beliefs about people who were empowered with various supernatural and magical abilities. Characters included various professionals, who in their work and daily life, turned to secret knowledge, engaged in the treatment of people or animals, and recited  prayers and spells from diseases or ‘vroky’ (‘curses’). 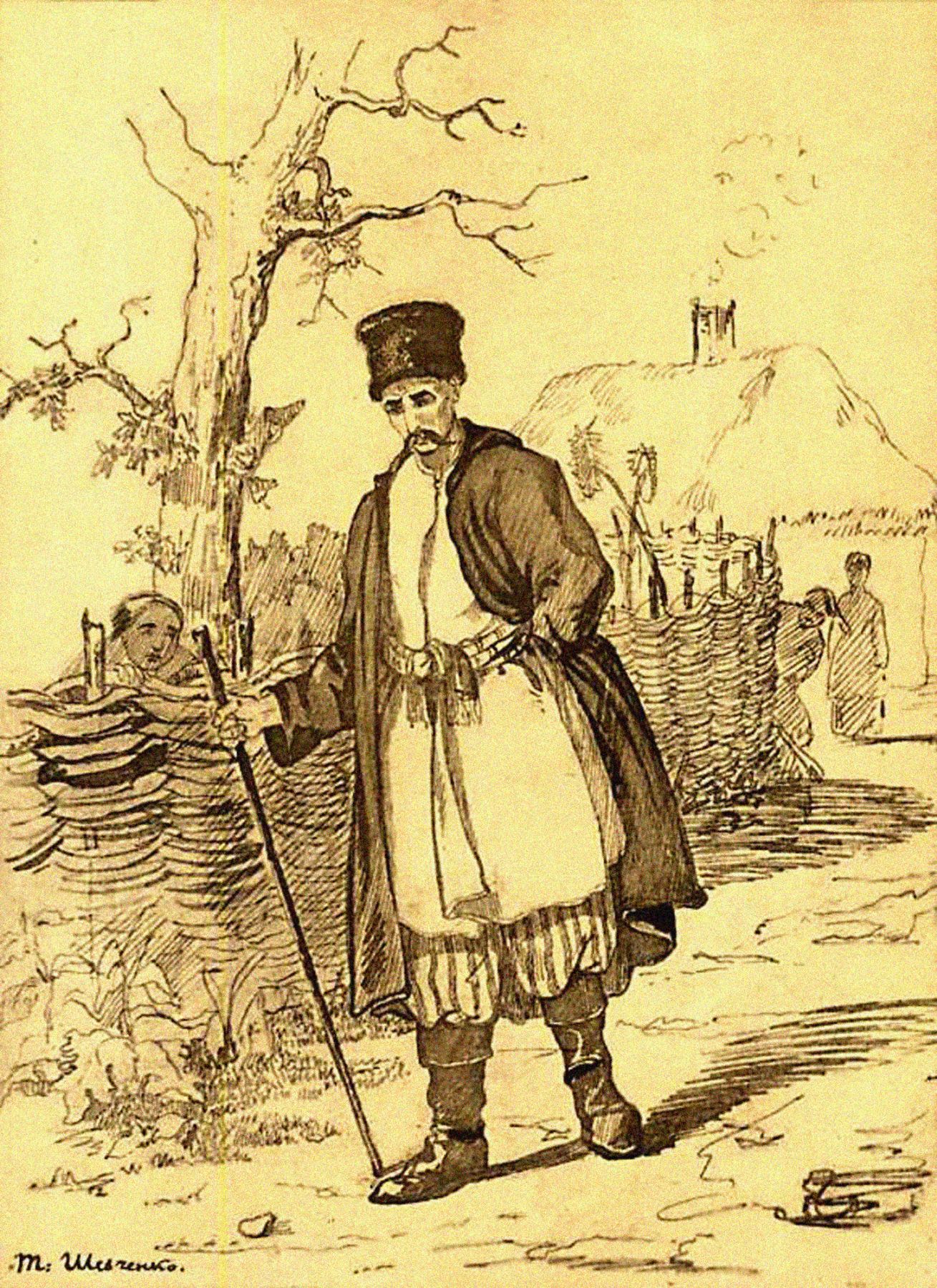 Taras Shevchenko. Sorcerer. April-October, 1841. St. Petersburg. Illustration for the work by  G. F. Kvitka-Osnovianenko of that same name. . Paper, pencil, ink, quill , brush. Taras Shevchenko National Museum, Kyiv.
These characters were known as healers, sorceresses, and whisperers. These individuals were often considered ‘knowledgeable’ — those who possessed magical knowledge and skills (innate or acquired). Certain craftsmen who were believed to have supernatural abilities and esoteric knowledge also belonged to these groups of ‘unusual’ people. They included potters, chumaky, blacksmiths, carpenters, shepherds, priests, musicians, millers, and fishermen. For example, it was believed that blacksmiths could trick demons. There was a legend in Boiko villages about a blacksmith who was able to cheat Death, get it drunk with vodka, and seal it in a bottle. Saints Cosmas and Damian were considered patrons of blacksmiths. According to legends, the craft and power to work with fire was given to people by God and saints. Many ‘knowledgeable’ people (beekeepers, blacksmiths, potters) had their own mythological assistants called ‘nechystyi’ (’unclean’, ‘evil spirit’). In Podillia, it was believed that the apiary had its ‘master’ — a spirit that cared for hives and bees. ‘Unusual’ people knew special prayers and rituals that were designed to protect their work. For instance, on Easter in Polissia, when the priest said ‘Christ is Risen!’, instead of answering with a verse, fishermen said: ‘And I have a fish’. This was meant to increase their profits. Shepherds also had a number of magical rituals that helped protect cattle from ‘nechystyi’ and wild beasts. In Ukrainian villages, ‘People of the roads’ (wanderers) were considered special: musicians, chumaky, and old itinerants. The peasants believed that they had extraordinary abilities and associated them with a number of mythological stories where contact with ‘evil’ were described. These wandering people were characters who embodied both safe  ‘internal’ spaces and at times hostile ‘foreign’ spaces. Thus, while completing a long and dangerous journey, chumaky were in constant contact with unholy spirits, evil people, and diseases, including Cholera and the Plague. 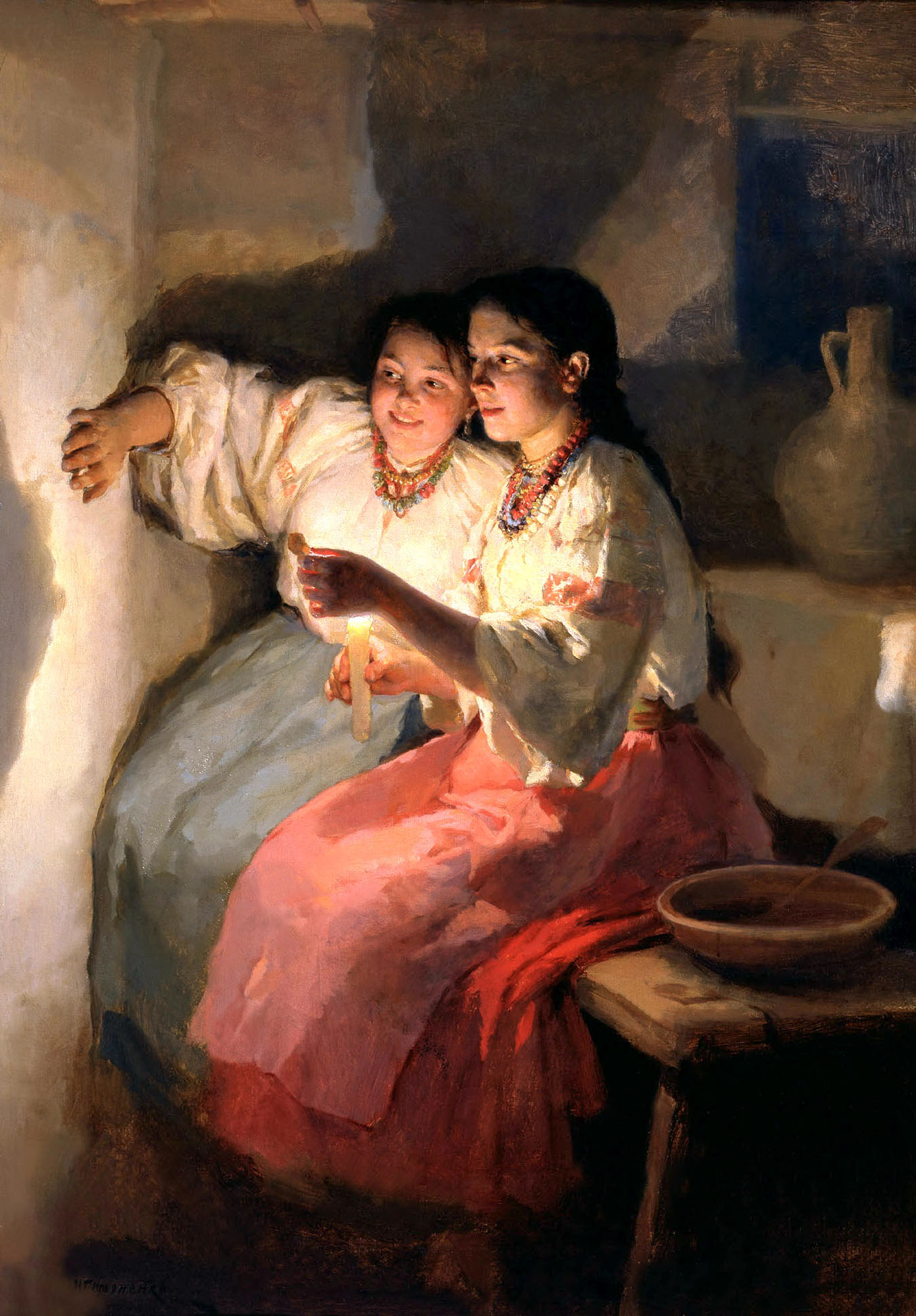 Mykola Pymonenko. Divination. 1888.
The figure of the witch belongs to the category of transitional, semi-demonic beings in Ukrainian lower mythology. According to traditional beliefs, witches have always lived among people. There were ‘born’ and ‘trained’ witches. ‘Born’ witches were able to turn into different animals (cat, frog, or bird). It was believed that a witch could cast a drought spell and steal stars or dew. Witches were often suspected of stealing milk from cows. Ukrainians believed that witches died a very difficult death. When a witch died, it was common practice to remove her ceiling so that her soul could escape to the other world. 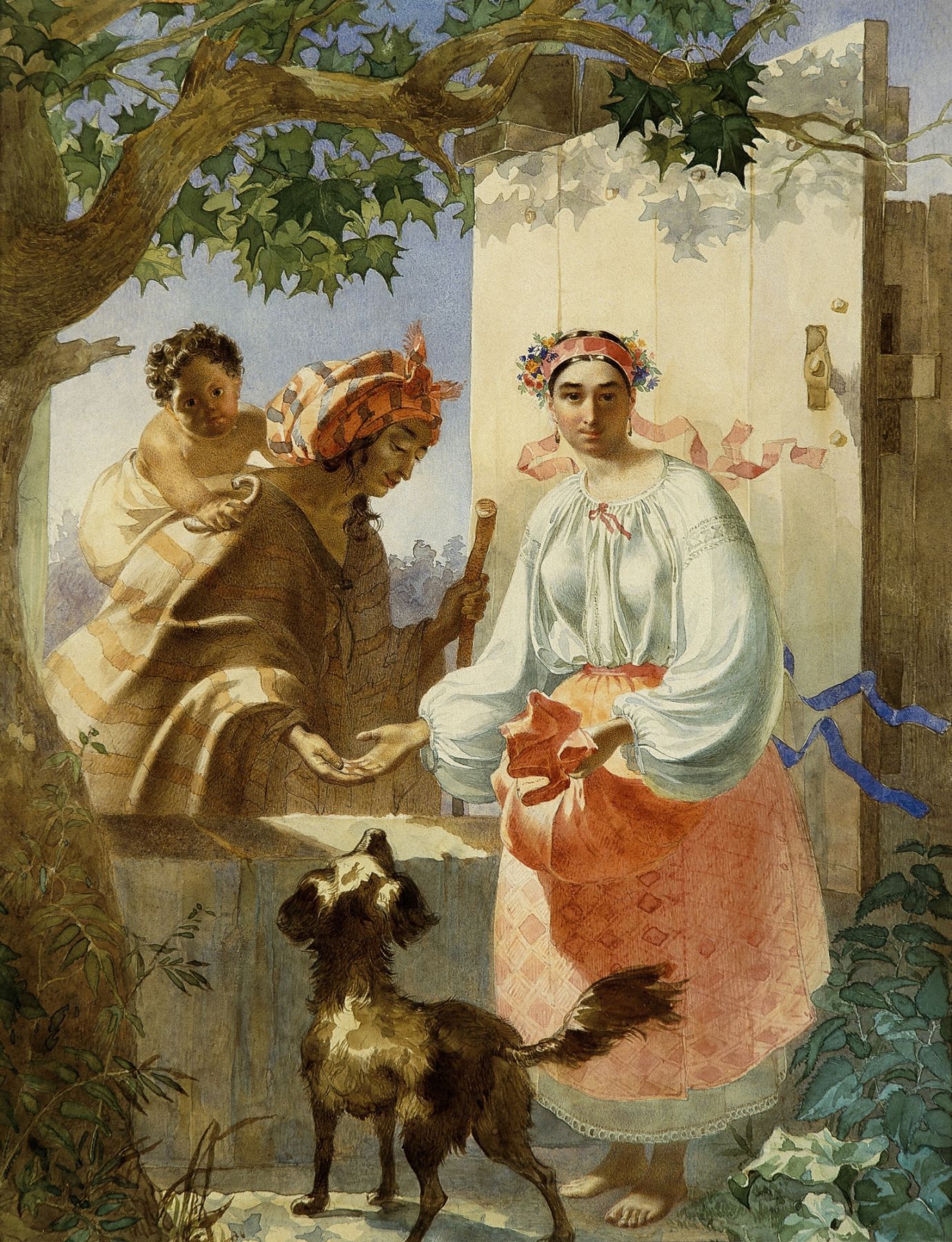 Taras Shevchenko. Gypsy Fortune Teller. 1841. Drawing, paper, watercolour.
Rusalky and mavky are archaic and distinctive characters in Ukrainian lower mythology. Scholars associate rusalky with ‘death hostages’ — people who died of unnatural causes such as suicide or drowning. It was generally believed that rusalky were girls or unbaptised children. Rusalky played a prominent role in calendrical rituals for the Feast of the Holy Trinity. That is why they are associated with ancestral worship and the cult of vegetation. 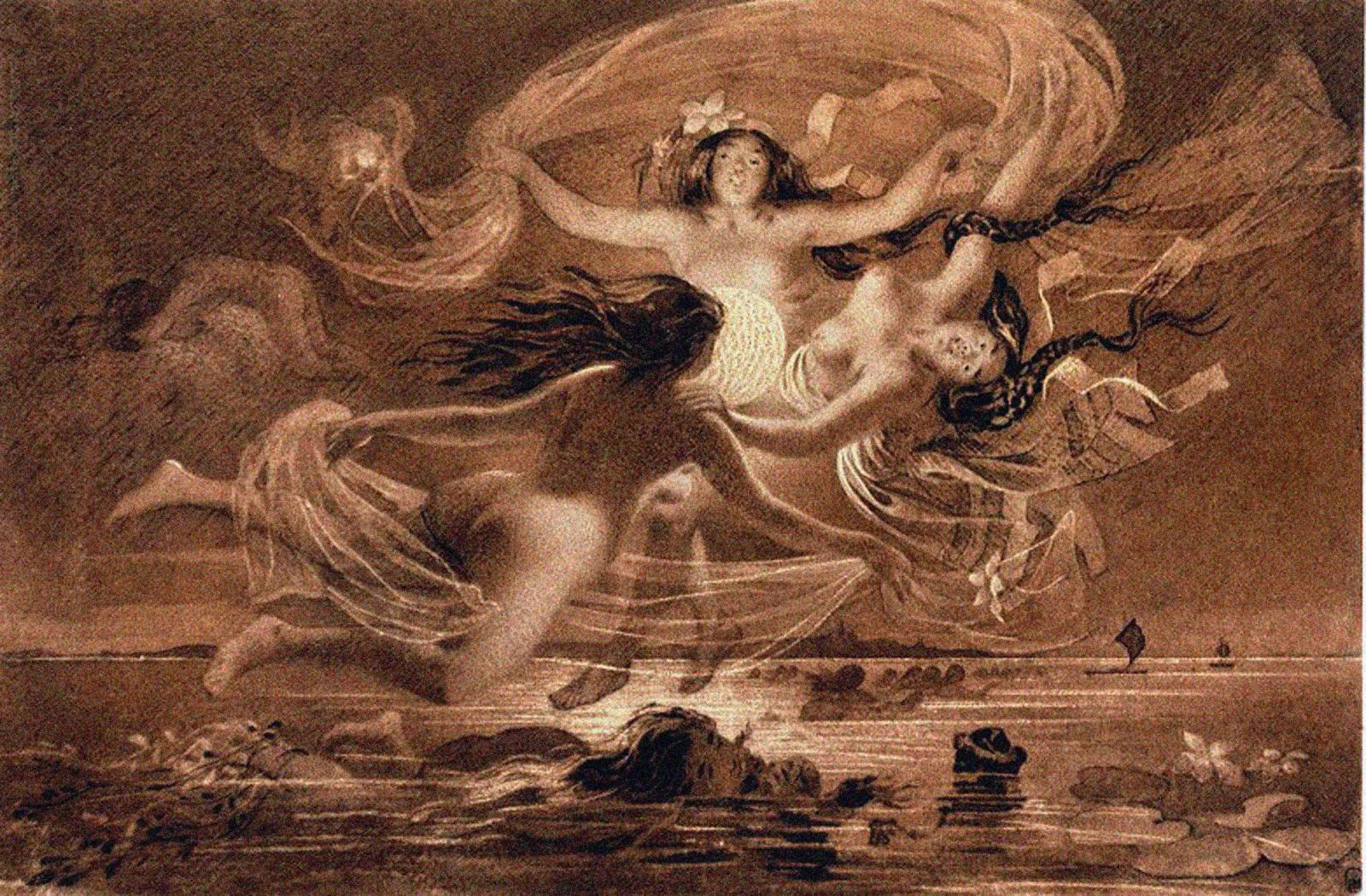 Ukrainians, like many other people, believed in domestic spirits - guardians and patrons of the home known as domovyky and khovantsi. According to folklore, domestic spirits could protect homes, property, care for livestock, prohibit  witches from  milking cows, and lull children to sleep. A Domovyk or khovanets also had the capacity to offend and harm the home owners.

The chort (‘devil’) is considered a complex character in Ukrainian demonology as the devil’s folk image was shaped and  influenced by the late Christian, mostly apocryphal, tradition. In etiological legends, the devil often co-creates the world with God. Ukrainians believed that the devil even performed some of God’s work  during the creation of the world. He was also credited with creating some professions and objects such as blacksmithing, cradles, mills, carts, and horilka (strong spirit). In folk tradition, chort had many names: iuda (‘Judas’), bis (‘imp’), dyiavol (‘devil’), shcheznyk (‘goblin’), zlyi (‘evil’),and  irod (‘Herod’). The devil typically appeared to people disguised as a human, usually wearing a city suit and a hat. It could be recognised by certain signs such as lameness and a squinting eye. As a rule, the devil did not have human legs, but had horse or chicken legs. 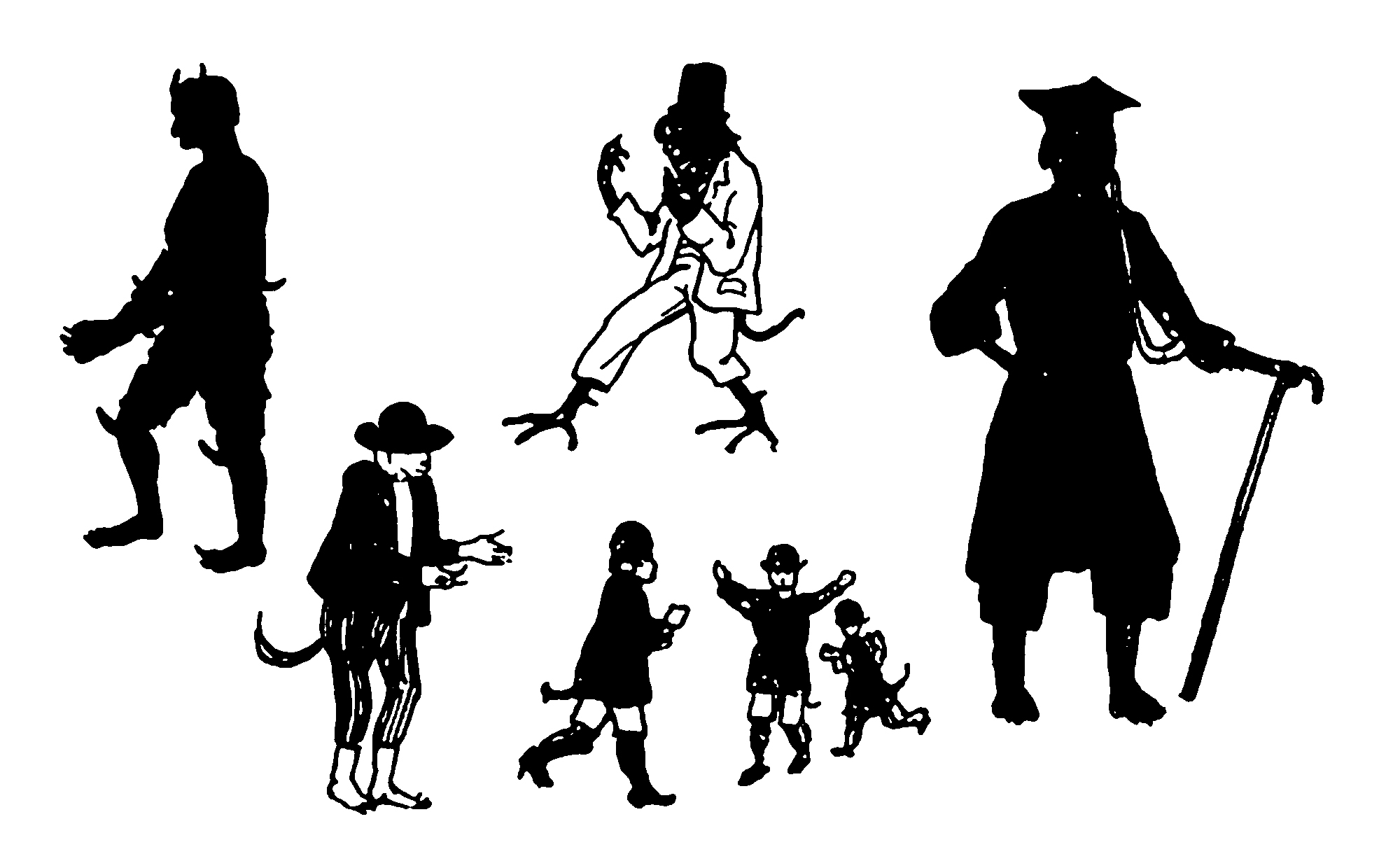 Thus, the traditional worldview, composed of mythology, religion, faith, ideas about the material and spiritual worlds, and belief in the supernatural, magic and rituals, is a coherent multi-layered system. This system is sometimes fragmented and contradictory, but all of its elements are organically adapted through e folk tradition into a unified folk philosophy and worldview.