Svitlana Makhovska
The Regional and Cultural Mosaic of a Ukrainian Wedding

The wedding ceremony was embedded in familial  ritual systems,  had a complex semantic structure, and was characterised by wide variability. This was due to various factors, including geographical, historical, and socio-economic conditions, interethnic contacts, and religious characteristics, amongst others. According to wedding ceremony descriptions of the late 19th-early 20th centuries, researchers distinguish several regional types namely: central (which includes Podillia and Slobozhanshchyna subtypes), Polissia, Carpathian, and southern variants. The geographic areas of each type corresponds to an ethnographic zone of Ukraine in the late 19th-early 20th century. 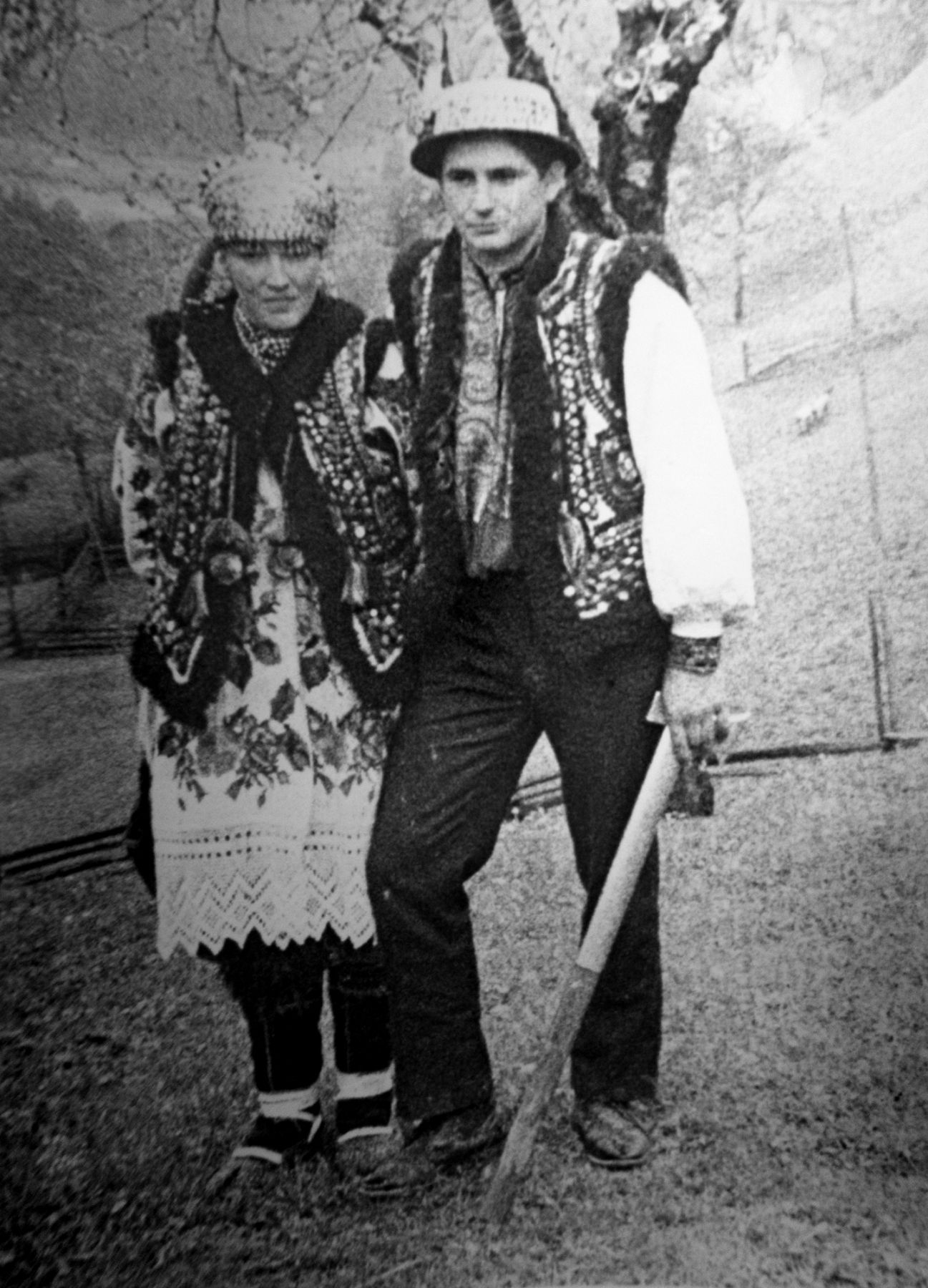 ‘Prince’ (groom) and ‘Princess’ (bride). 1972. Verkhnyi Yaseniv village, Verkhovyna raion, Ivano-Frankivsk Oblast
The differences between wedding ceremonies can be detected in various components of the wedding ritual structure. Depending on the territory of residence, certain ritual actions may have taken place at different stages, or even be absent; the number, involvement, and ritual functions of performers, and the timing of rites and their semantic meaning also differed. Identical folk names used to denote ritual actions, participants in the rite, attributes, etc. often indicate different actions, even in neighboring settlements. 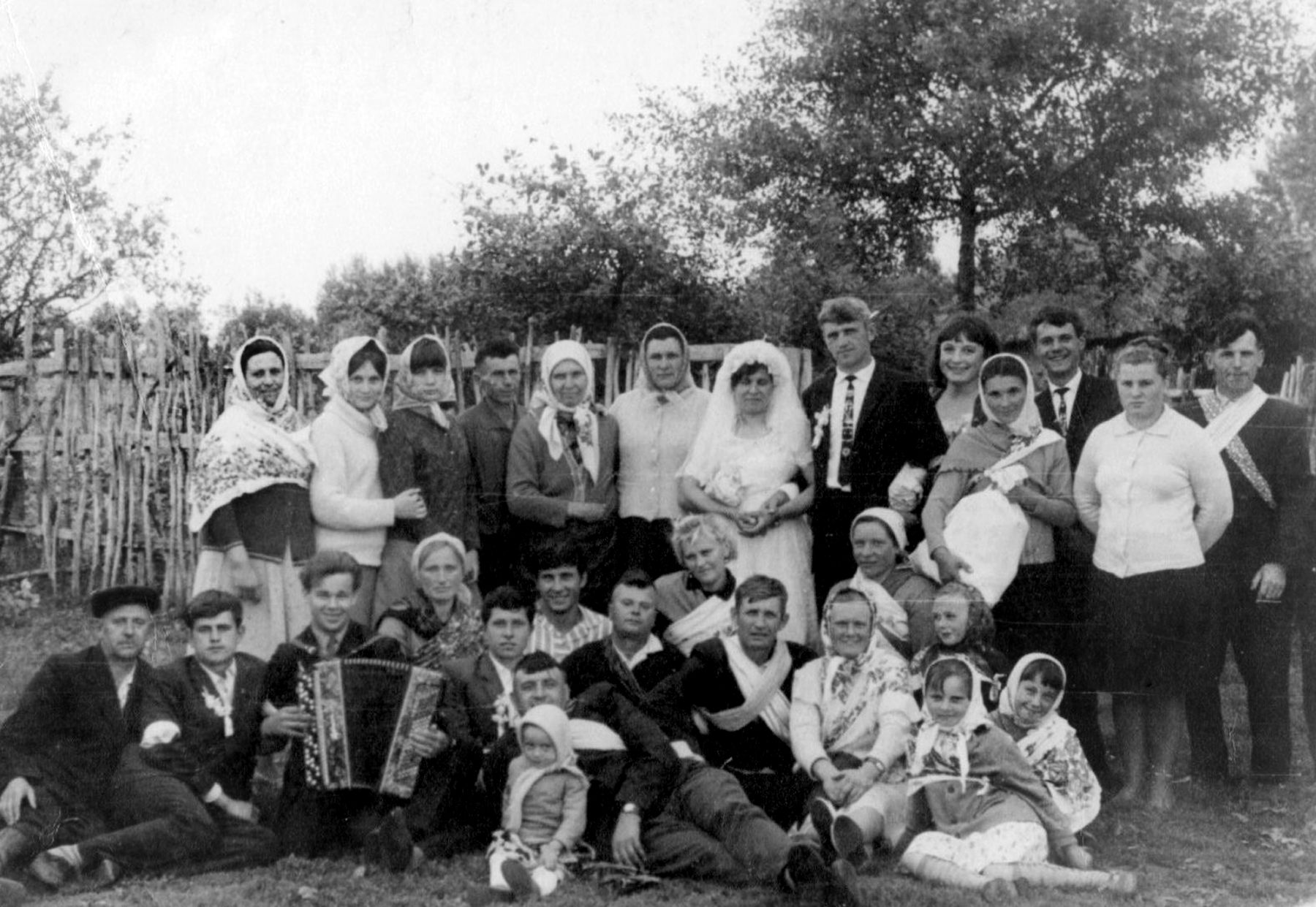 Wedding. 1968. Okhtyrka, Okhtyrka raion, Sumy Oblast. Photo from the family archive of the Bublyk family
The marriage of a boy and a girl was traditionally preceded by the premarital communication of young people that integrated many forms of folk entertainments such as night parties called vechornytsi and dosvitky, Andrew's night (November 30, Old Style, December 13, New Style), vyhin, vulitsia, kolodky, kutok, muzyky, poliana, selo, staviyko, etc.. Young people were held responsible for carrying out calendrical ritual actions such as Marena, vikha, Kupaila (on the night of June 24, Old Style / July 7, New Style), vodinnia kushcha (leading a bush), vodinnia rusalky (leading a mermaid), etc. During these festivities, young people were able to communicate and admire one another more closely; however, parents still decided whom their children would marry. This was primarily based on economic calculations while still trying to follow the custom of asking for their son or daughter’s consent.
Weddings usually took place in the autumn (October-November) and at  Miasnitsia (the week before Lent). Couples rarely married in spring and summer as exemplified by the phrase "Whoever drinks vodka during Petrivka (St. Peter's Fast), has no boots in winter". 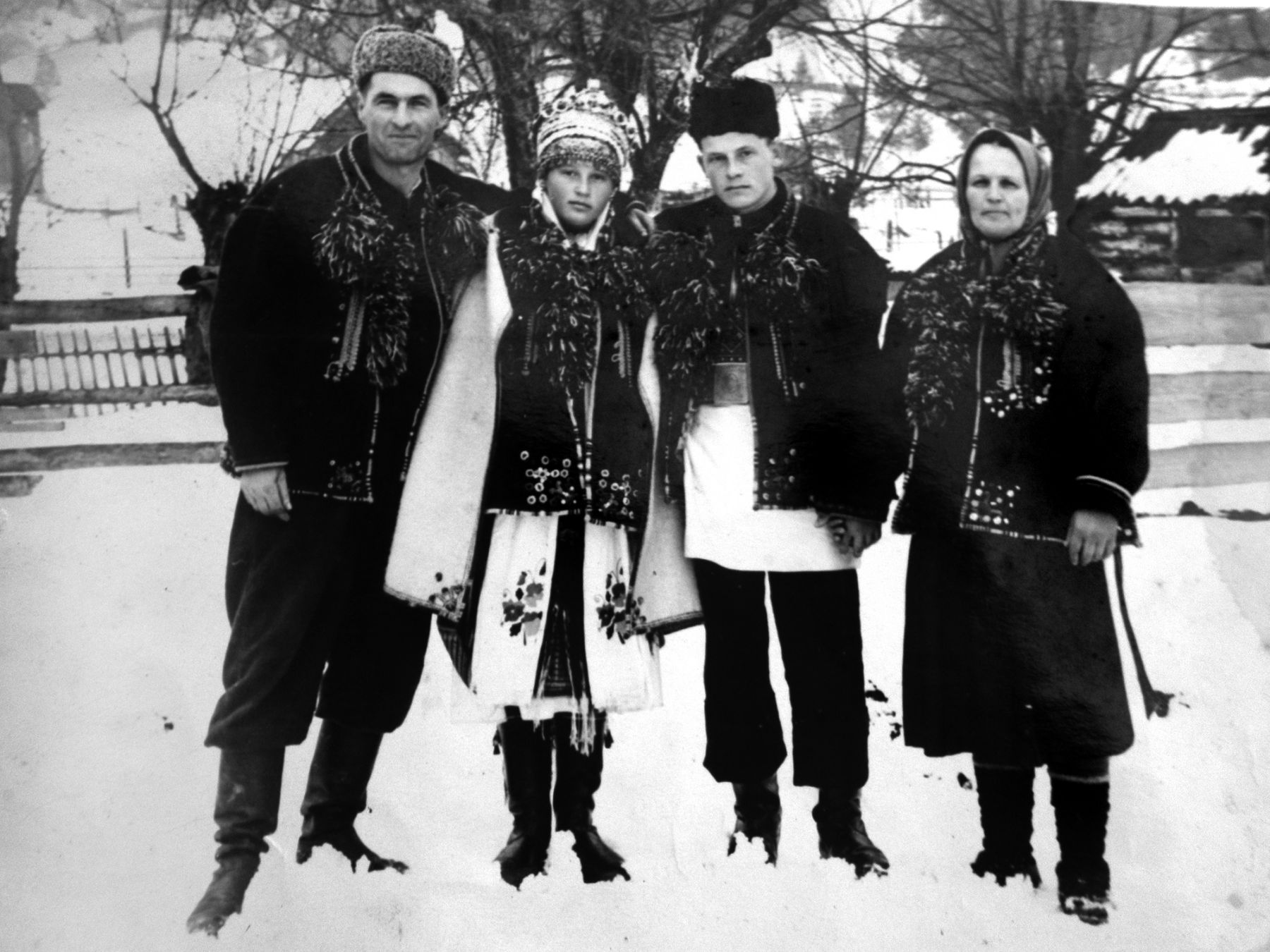 Newlyweds with Their Parents. 1978. Usteriki village, Verkhovyna raion, Ivano-Frankivsk Oblast
Within the context of wedding ceremonies, one should distinguish between wedding and marriage. The marriage agreement was conducted orally between the parents of the newlyweds at the pre-wedding stage (matchmaking), and was committed (sanctioned) at vinchannia (the crowning stage) and at the actual wedding.

Ukrainian weddings (vesillia, visilie, svadba, svalba, svaiba, etc.) traditionally consisted of many ceremonial actions that had a legal and initial/signatory nature. They were accompanied by both poetic and prose folklore texts and dances relating to  various subjects.

In historical and ethnographic literature, wedding ceremonies are commonly divided into three cycles: the pre-wedding, the wedding itself, and the post-wedding cycle. The pre-wedding cycle includes rozvidky (seeking), svatannia (matchmaking),  ohliadyny (the bride-show), and zaruchyny (engagements). The wedding itself involves a loaf ceremony, wedding invitations, divych-vechir (girls’ night), bride price, posad molodykh (seating of the newlyweds at the table), covering the bride, and the bride moving to her husband's house. The post-wedding cycle consists of prydany (dowrie), perezva, pyrozhyny, tsyganshchyna and other rites performed over the course of a week in honour of the parents on the occasion of their son's marriage and the daughter-in-law's entry into a new family. 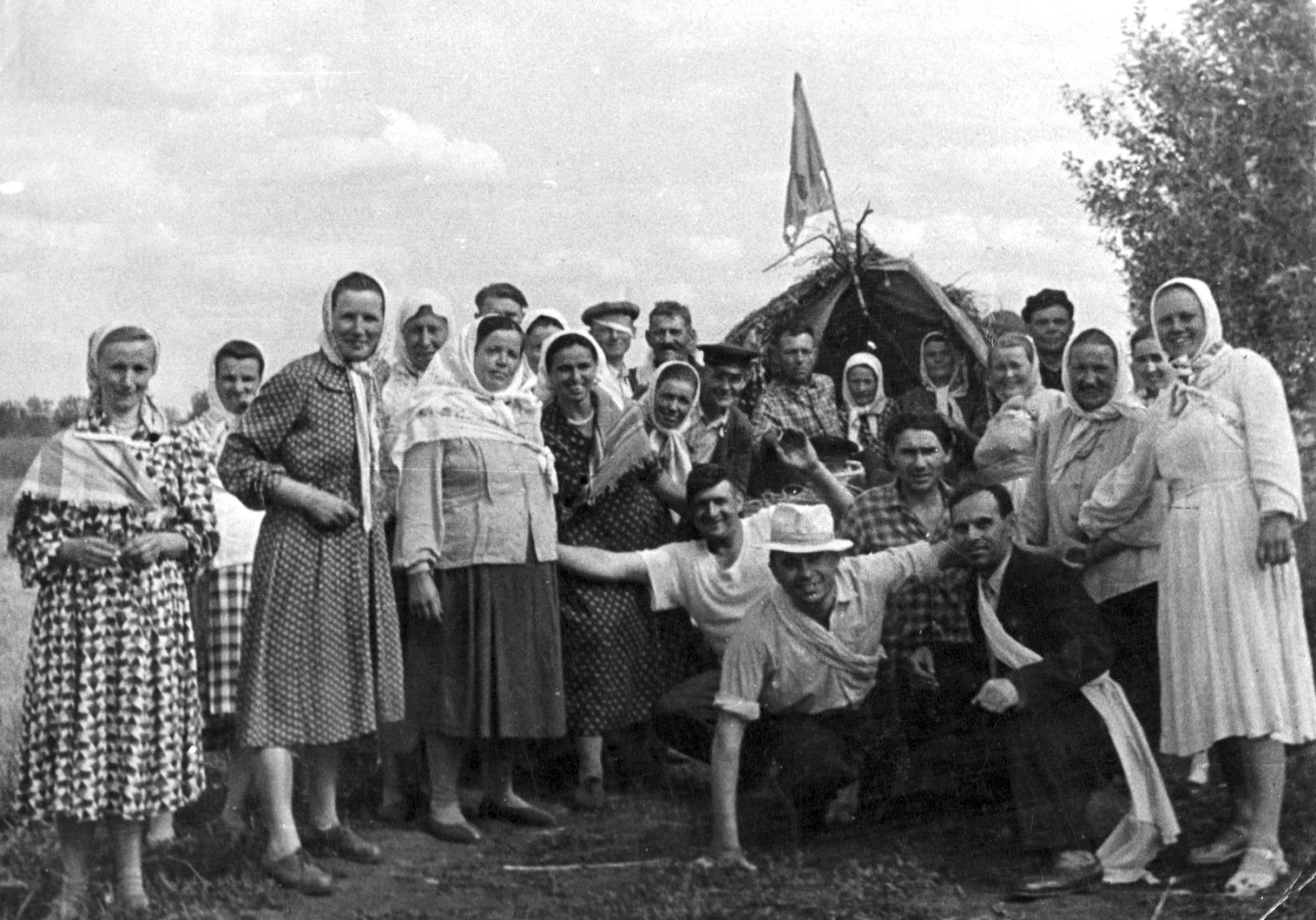 The decisive event — the solemn consolidation of consent to marriage — was known as zaruchyny (engagements): poshliubyny, zvovyny in Volyn, slovo in Khmelnychyna, slovyny in Lvishchyna, male vesillia in Poltavshchyna, rushnyky, khustky in the central regions of Ukraine, svatannia, svatanky in Zakarpattia and southeast regions of Ukraine. The etymology of the word ‘zaruchyny’ is associated with the ritual bonding of the hands (‘ruky’) of the newlyweds on bread or grain. There is a lot of evidence, in particular from Poltavshchyna and Cherkashchyna, that the bride’s hands were tied with the elders’ ryshnyky (embroidered cloth pieces). The regional customs of this stage were ‘zatanciovuvannia vesillia’ (‘the wedding dancing’) in Volyn, Lvivshchyna, and Ivano-Frankivshchyna, as well as the first posad molodykh (seating of the newlyweds at the table), and receiving the first parental blessing. Termination of the pre-wedding agreement was an exception to the rule. In case it occurred, the girl's parents were required to reimburse za obrazu (‘for the offence’).

In the past, a rural wedding lasted from three days to a week, depending on the financial situation of the families. Friday (‘piatnistia-pochatnitsia’) was considered the most favourable weekday to begin the festivities. On this day, the female bakers baked a loaf (‘korovai’) and other wedding pastries (kalachi, shyshky, lezhen, dyven), and the bride and groom visited future guests, inviting them to the wedding (zaprosyny). 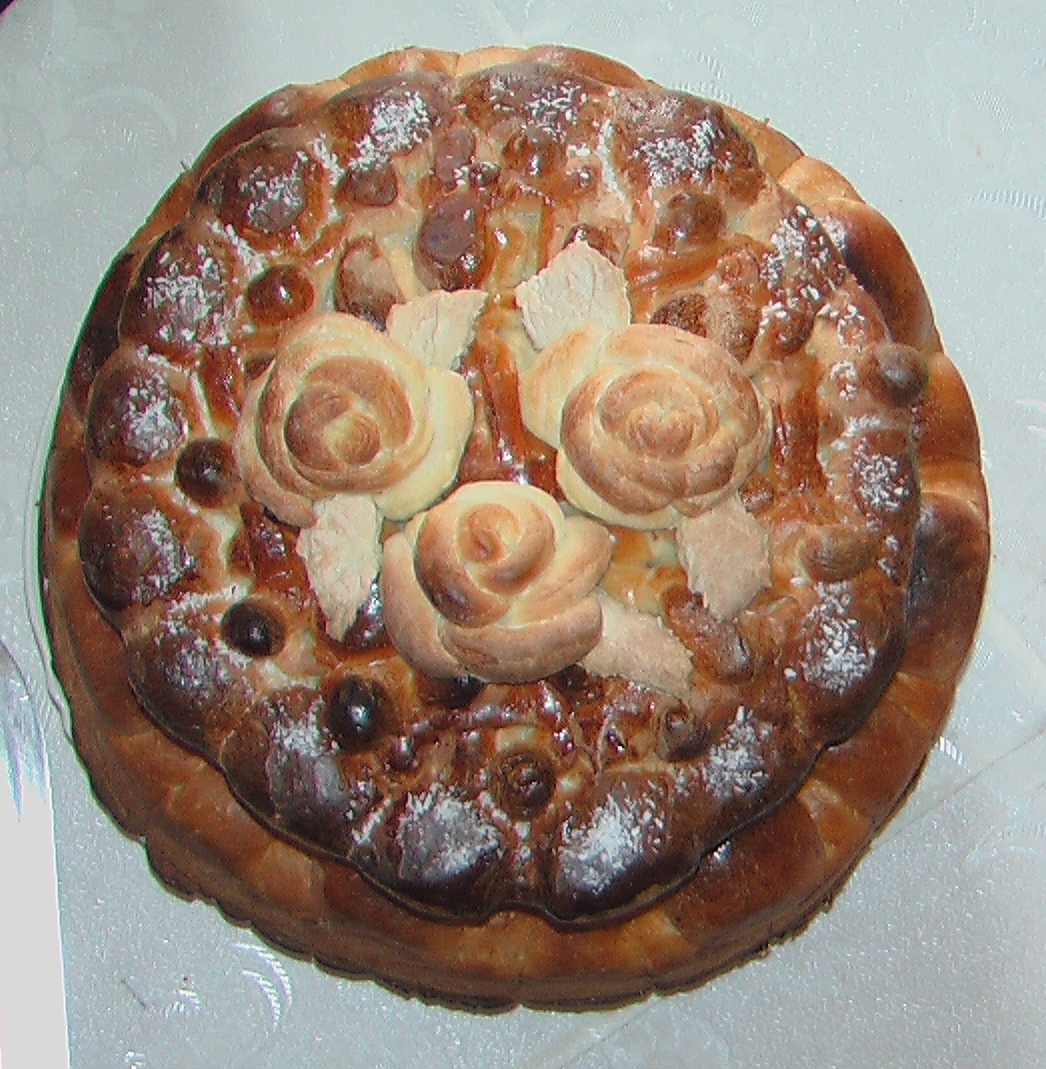 Wedding Loaf. 2009. Sloviansk, Sloviansk raion, Donetsk Oblast
The list of premarital wedding events also included preparatory rites: making and decorating a wedding tree (hiltse, viltse); making garlands; in some parts of the Carpathians, people collected periwinkle and made garlands for the bride and groom; making a sword (sabre) for a lamp, amongst others. As a rule, on Saturday there was a youth farewell party (girls’ night) where the bride's hair was braided (zaplitaly kosu) and everyone was feasting (chastuvatysia - ceremonial youth seating). 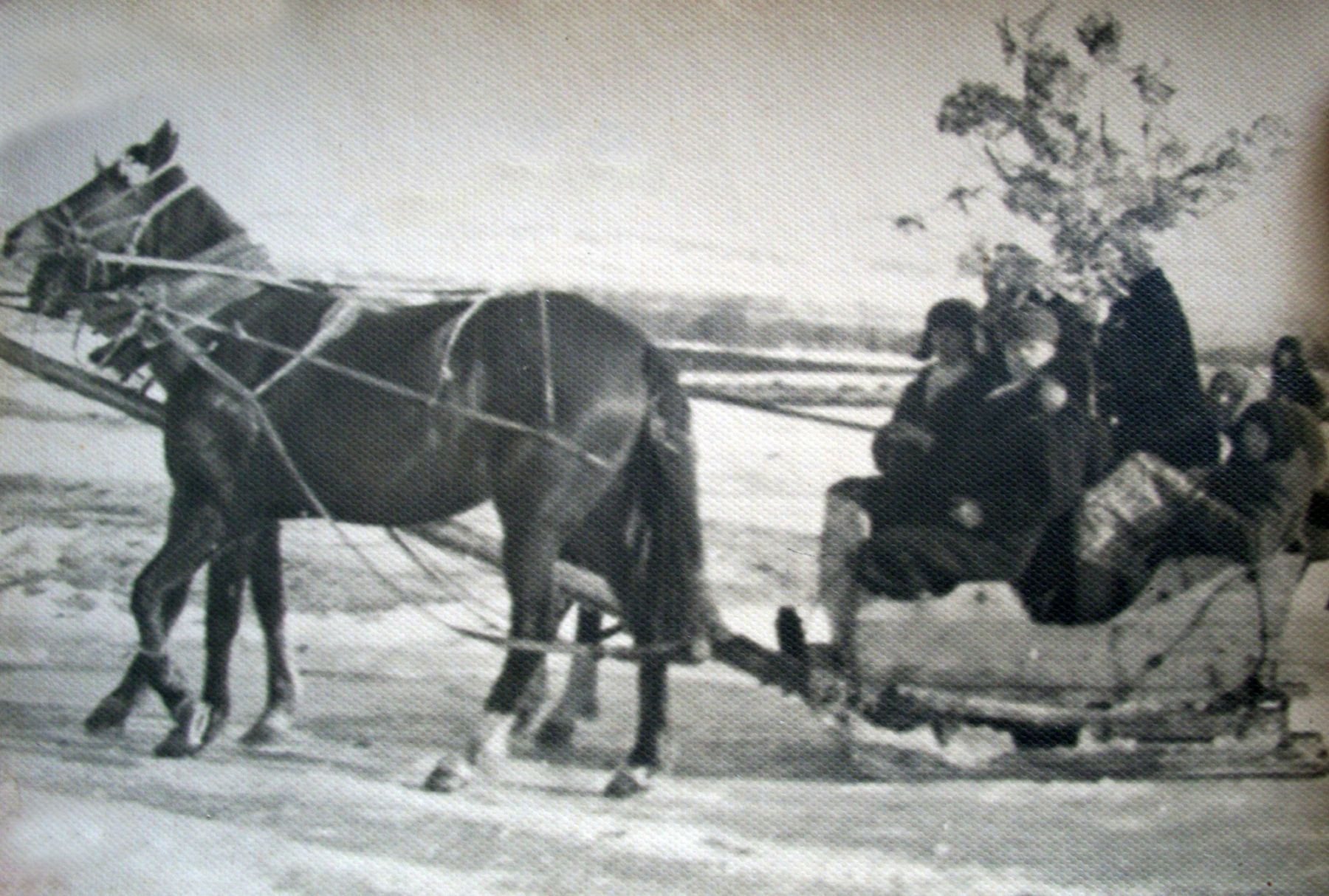 ‘Poizd’ with a Wedding Tree. 1959. Lytvynivka village, Bilovodsk raion, Luhansk Oblast
The marriage component of Ukrainian wedding ceremonies consisted of vinchannia (and/or solemn marriage registration) and a festive-ritual stage: farewells and meeting of the wedding entourage, the seating of the newlyweds, gifting families and newlyweds (daryny, chastuvannia, perepii, povnitsia), distribution of ceremonial bread (dilennia korovaiu), the rite of tying a woman's headdress over the bride’s head as a symbol for acquiring the status of a married woman (pokryttia molodoii, ‘covering the bride’), farewells to the bride, and meeting the bride in the groom's house.
In addition to the common gifts (chicken, pig, household utensils, linen, housekeeping items), newlyweds were often brought facetious gifts. Gifts were delivered with corresponding rhyming folklore texts: ‘We give you a cup of buckwheat so that there is never a dispute between the newlyweds’, ‘We give you millet so that the bride does not go barefoot’, ‘We give you onions so that the bride never gives her mother-in-law a fig’, ‘We give you a bag of birds so that the groom does not go to other young women’, ‘We give you pots and plates so that you are always happy’.  Various wishes were part of the sung  folklore that was obligatory for every single ritual action. Thus, in Ivano-Frankivshchyna, spivuhy (‘singers’) sang at the beginning of the wedding: ‘The wedding begins, God bless you’. 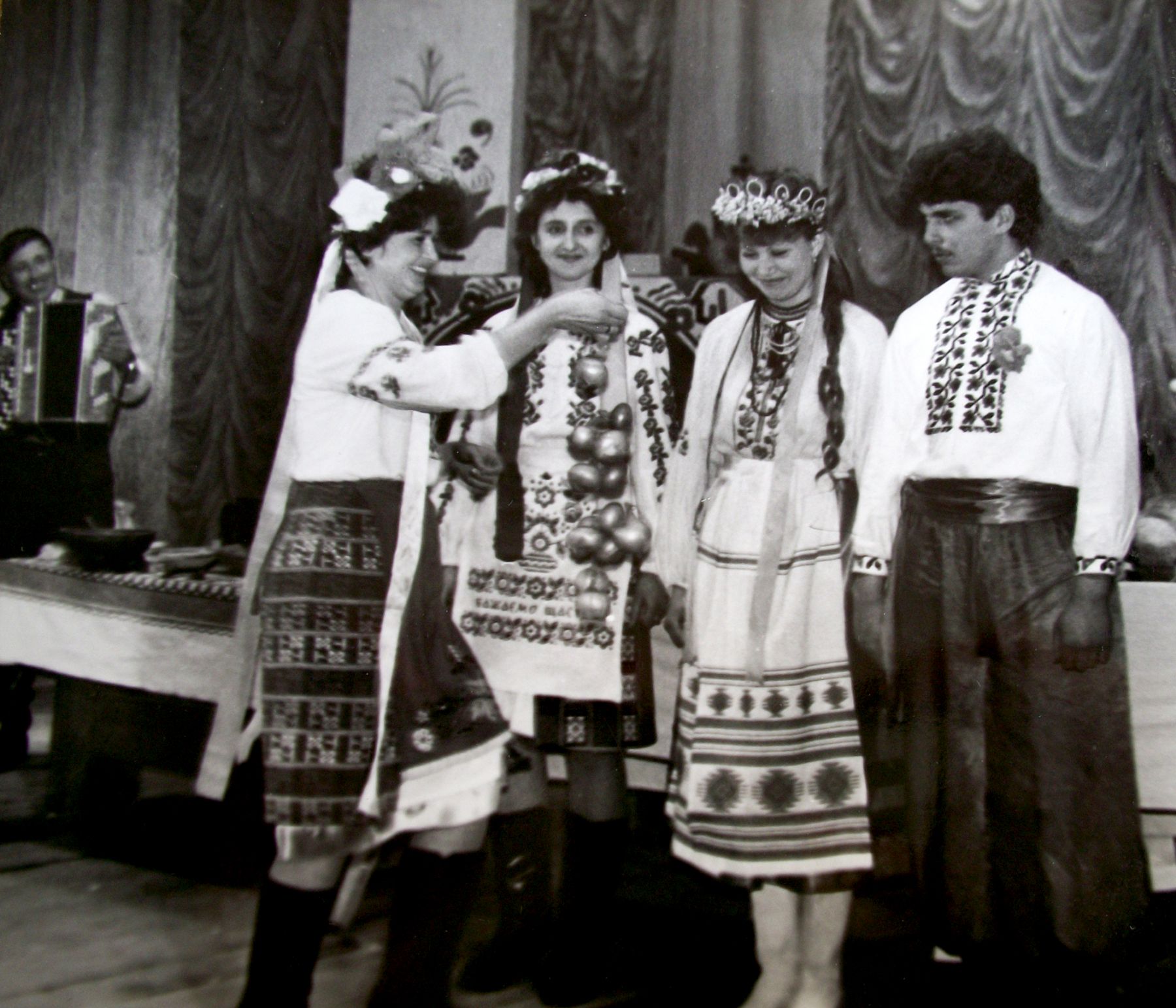 Facetious Wedding Gifts — ‘I give you a bunch of onions so that the bride does not ever give her mother-in-law a fig.’.Staging of a traditional wedding ceremony.1989. Bondarivka village, Markiv raion, Luhansk Oblast
For a long time, an important component  of the wedding was the custom of the first wedding night (komora) which consisted of testing and demonstrating the bride’s chastity. The result determined the content of the post-wedding ceremonial cycle. If the bride was ‘honest’, then svashky walked with a red flag on a long stick, or set it on the roof; sometimes they tied a bell to the stick, sang songs of appropriate meaning, beat pottery, and carried the bride's mother in their arms; loaf, glasses, and spoons were decorated with red ribbons. If the bride lost her virginity before marriage, the groom and his relatives addressed scathing jokes to the bride's parents and committed a ‘reprisal’, including smearing the house with tar. Her parents wore a straw yoke around their necks; guests were fed with bread and onions; the bride was forced to carry water in leaky linen, and her parents put on yokes and were given horilka (a strong spirit) in leaky glasses.
The post-wedding ceremonial cycle included many ritual actions that symbolized the wife joining a new family, namely: bathing the newlyweds (mytvyny), ‘beating gruel’, having a breakfast, the second gifting of the newlyweds, ceremonially dressing up the guests (tsyganshchyna), bathing parents, ‘ramming the peg’, ‘threshing rye’, amongst others. Among the ritual actions, married men and women were dressed  up as gypsies, blacksmiths, and as a fake bride and groom. In most regions this  was called tsyganshchyna (‘gypsyism’). 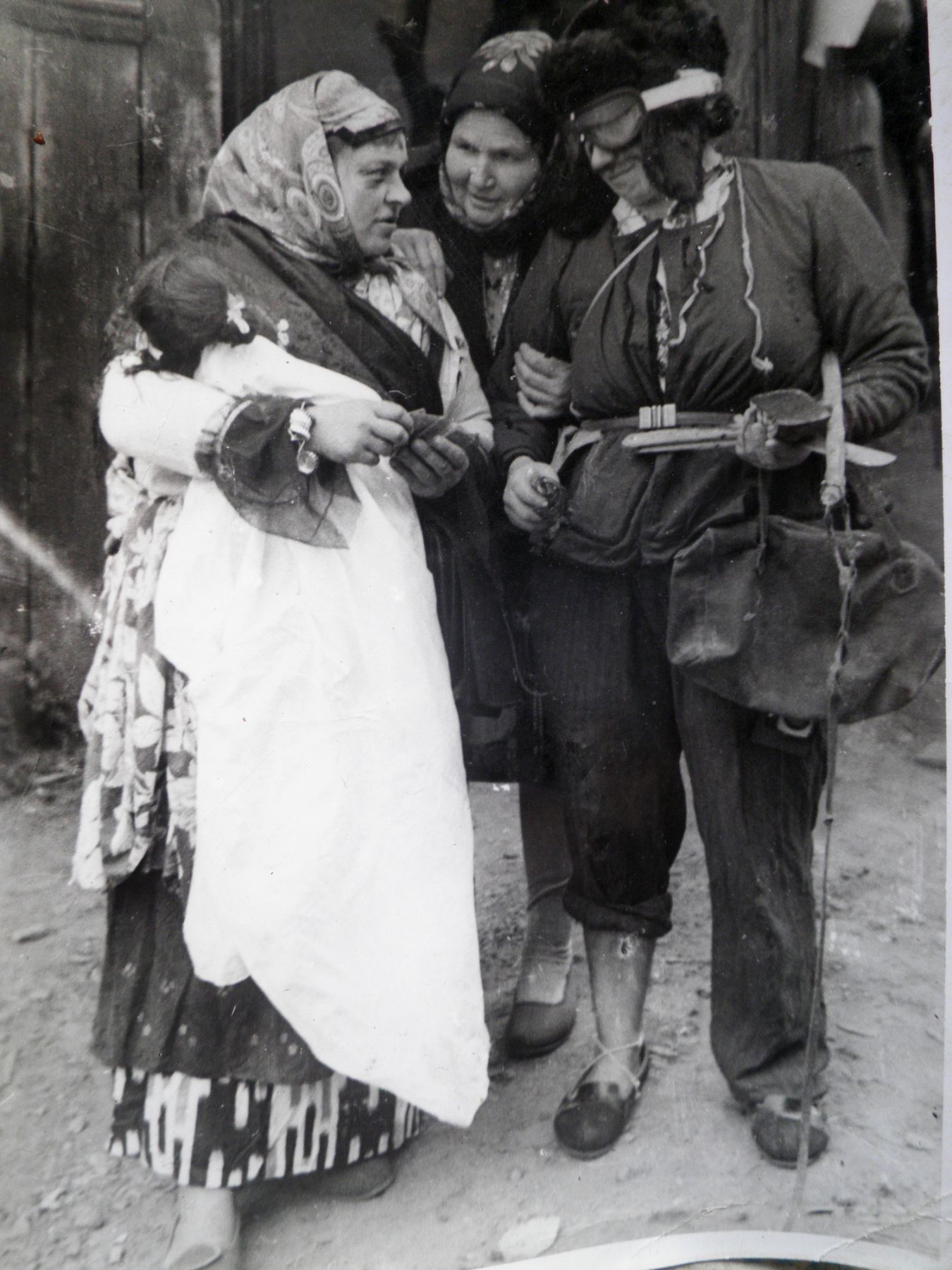 ‘Tsygany’ (Gypsies). 1980s. Veremiivka village, Chornobaiiv raion, Cherkasy Oblast
A feast prepared by the bride's mother was considered the final component  of the wedding. The newlyweds and close relatives were invited to what were called hostyna (pokalachyny, kalachyny, rozhidnyi borshch, svashyny, khlibyny, zazovy, do chopa, khlib odvidat, do teshchi na blyntsi, na pyrogy, khlib odiedat, rozhodyny, rozpliovyny) . After the feast, the newlyweds and guests went home, and, in fact, that was the end of a traditional Ukrainian wedding.
As a result of urbanisation, industrialisation, the introduction of new Soviet rites, and the establishment of new social practices, Ukrainianwedding ceremonies have undergone significant changes during the 20th century. Wedding rituals were reduced and simplified; the list of traditional wedding roles was reduced, but new actors were also added (tamada). While large weddings were practiced ‘in huts’ in the countryside, in urban traditions, people tried to arrange feasts in canteens, cafes, or restaurants. Folk songs were replaced by Soviet songs. The vinchannia ceremony was banned, but new customs became popular, such as a sip of champagne after a solemn registration at the registry office. Sometimes this was accompanied by breaking a glass, stealing a bride's shoe and drinking champagne from it, and so on. 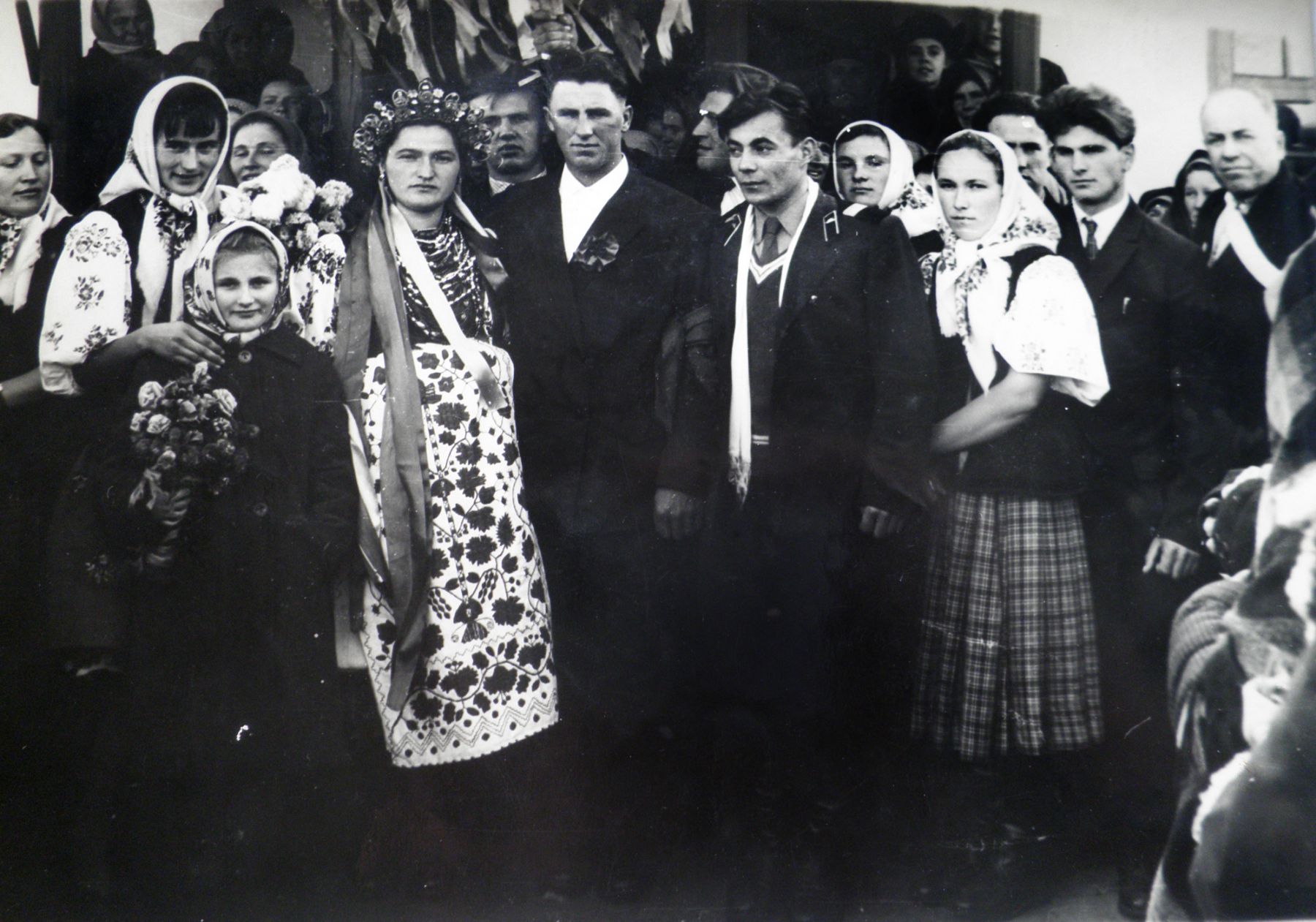 Wedding. 1980s. Veremiivka village, Chornobaiiv raion, Cherkasy Oblast
Modern Ukrainian weddings have become commercialised and have acquired universal customs. For example, the bride throws a wedding bouquet over her shoulder, and unmarried girls and women try to catch it; the bride and groom arrive at the  marriage ceremony separately and the bride is led to the altar by her father. Simultaneously, there is a new tendency among young people to turn to their national heritage and arrange weddings in an authentic, folk style.