Folk religion (also known as rural/village religion) is the complex of folk knowledge, mythological ideas, and ritual practices that have religious significance for their followers. Ukrainians, like other nations who were predominantly agricultural for a significant period, established religious folk beliefs based on ancient agrarian cults, the cult of ancestors, and household magic (this set of beliefs and rituals is also known as iazhychnytstvo or poganstvo, ‘paganism’) and adapted them to the needs of Orthodoxy and partly of Catholicism (in western Ukraine). As a result, the rural religion of Ukrainians in the late 19th - early 20th century was essentially folk Christianity (also known as folk Orthodoxy, pagan-Christian syncretism, and folkloric Christianity). Researchers understand it as the local folk interpretation of the Christian worldview and rituals; it was how Christianity de facto existed in the rural environment. 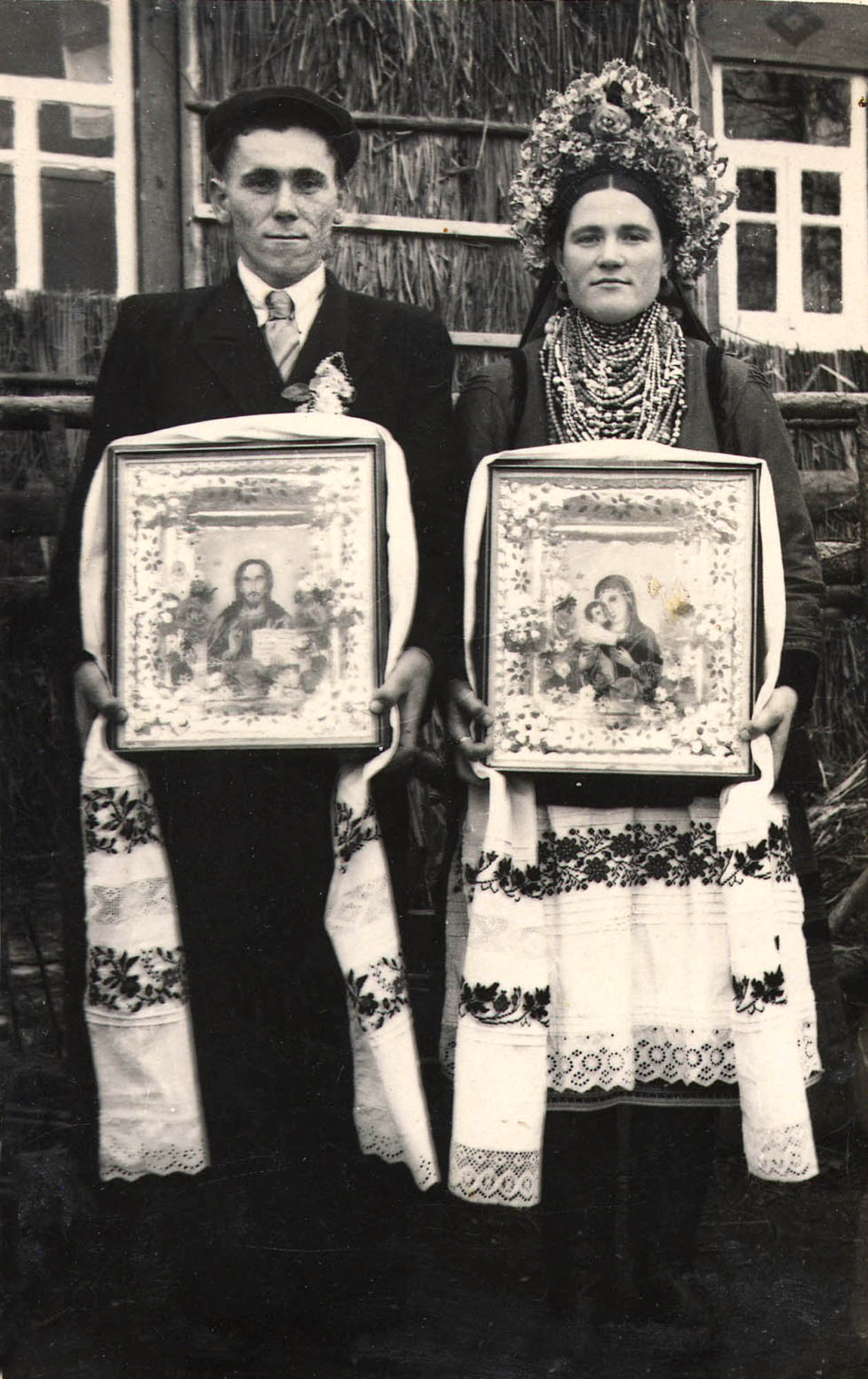 Researchers often trace the origins of folk religion back to  pagan practices in Rus’. In ‘yazytsi’ (in tribes or more generally, among the people), local rituals (community or familiar) were practised  quite simply and in an almost utilitarian manner. These rituals often intertwined with the advanced cult of ancestors, agricultural and hunting magic, and ritualism based on the cult of fertility. This later developed into a large complex of calendrical and familial rituals that survived until the early 20th century.  Particular calendrical rituals like vodinnia topoli, vodinnia kushcha, vodinnia rusalky, Kupalo, Kostrubonko, and vodinnia kozy contain references to sacrificial practices (of course, by this time these rites acquired a symbolic or playful character). The plots of some ballads describe the transformation of drowned women into objects from the surrounding environment — a phenomenon that can be traced to ancient rites for invoking rain.

In funerary and memorial traditions, the rite of ‘hoduvannia mertsiv’ (‘feeding the Dead’), the male burial ritual game ‘byty v lubok’, and folk stories about how the elderly and infirm people ‘sadyly na lubok’ have been preserved. These are folklorised remains of the ancient cult of ancestors. Researchers believe that the ritual and carnivalesque practise of dressing up during Koza, Malanka, and wedding perezva rites are associated with old beliefs about visitors ‘from the other side’ (for example, ancestors) coming to the world of the living. They were considered to have a magical and beneficial effect on soil fertility, cattle fertility, and family well-being. Ukrainian folk fairy tales (for example, Kotyhoroshko, and Yaitse-Raitse) also contain vestiges  of  totemistic practices that existed among the Eastern Slavs such as hunting taboos, and agrarian magic. 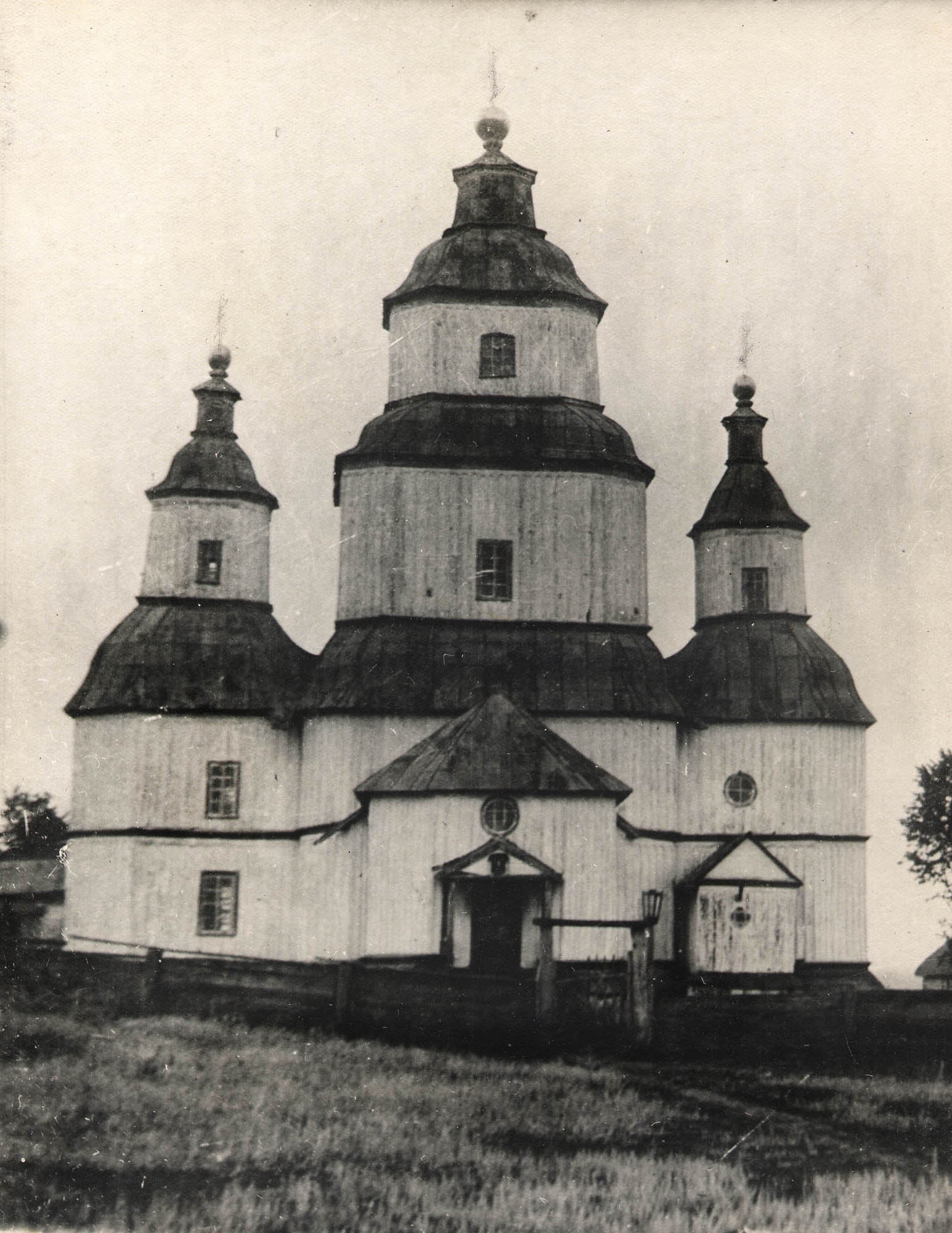 hus, at the time when representatives of the Ukrainian intelligentsia and clergy began to actively collect folk art, rural religion existed, to quote the researchers, in the form of “Christian-pagan folk Surzhyk”. The folk tradition included and borrowed from Christian tradition the clearest, most attractive, and useful phenomena, such as prayer, an organised calendar, sviatsi, marriage, demonisation of lower mythology, and more. 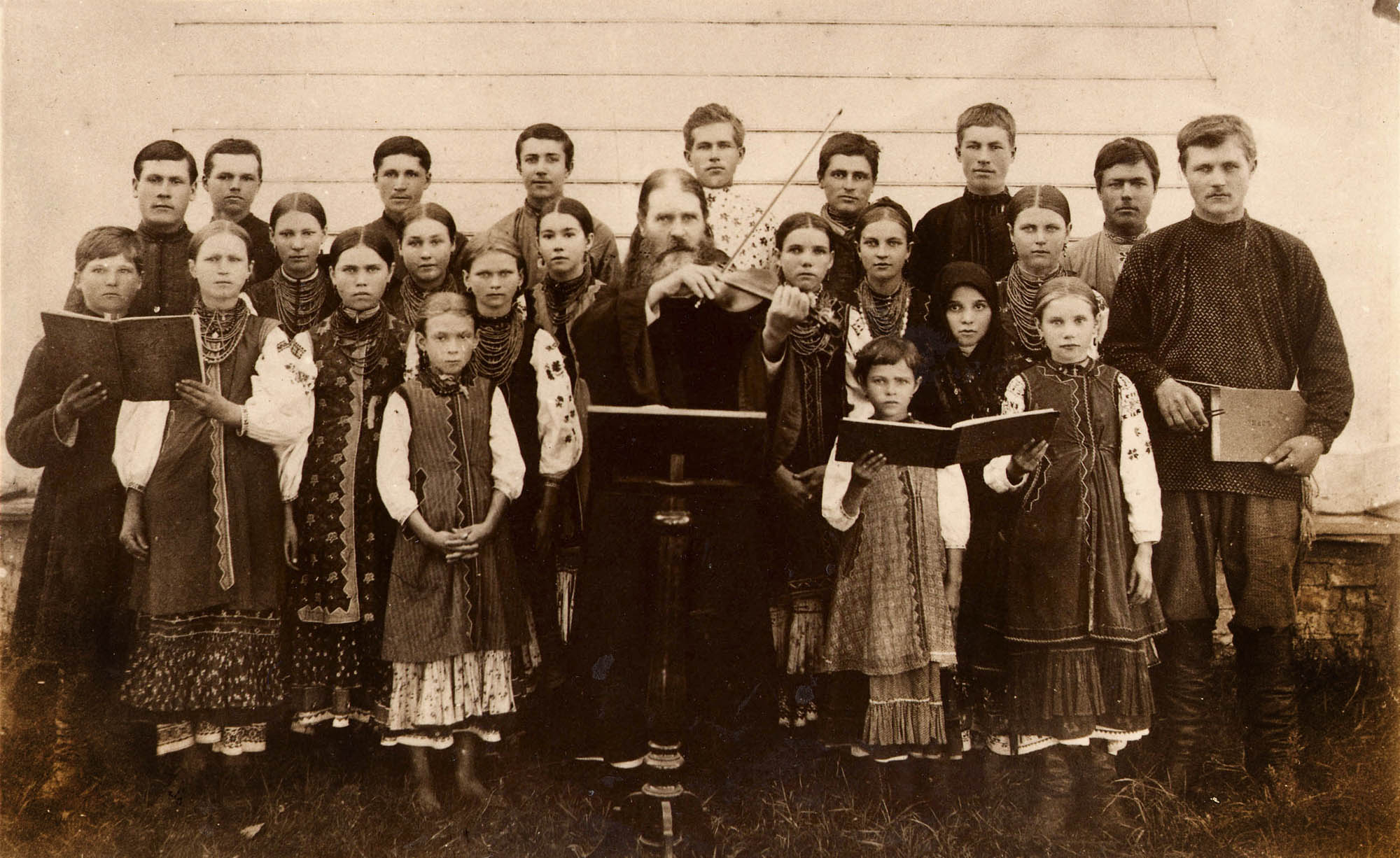 The main differences between folk Christianity and official Christianity are the naive and folkloric  interpretation, existence, and transmission of Christian dogmas, stories, and images. Saints hold a prominent position in the Ukrainian system of religious beliefs and the folk icon plays an important role. 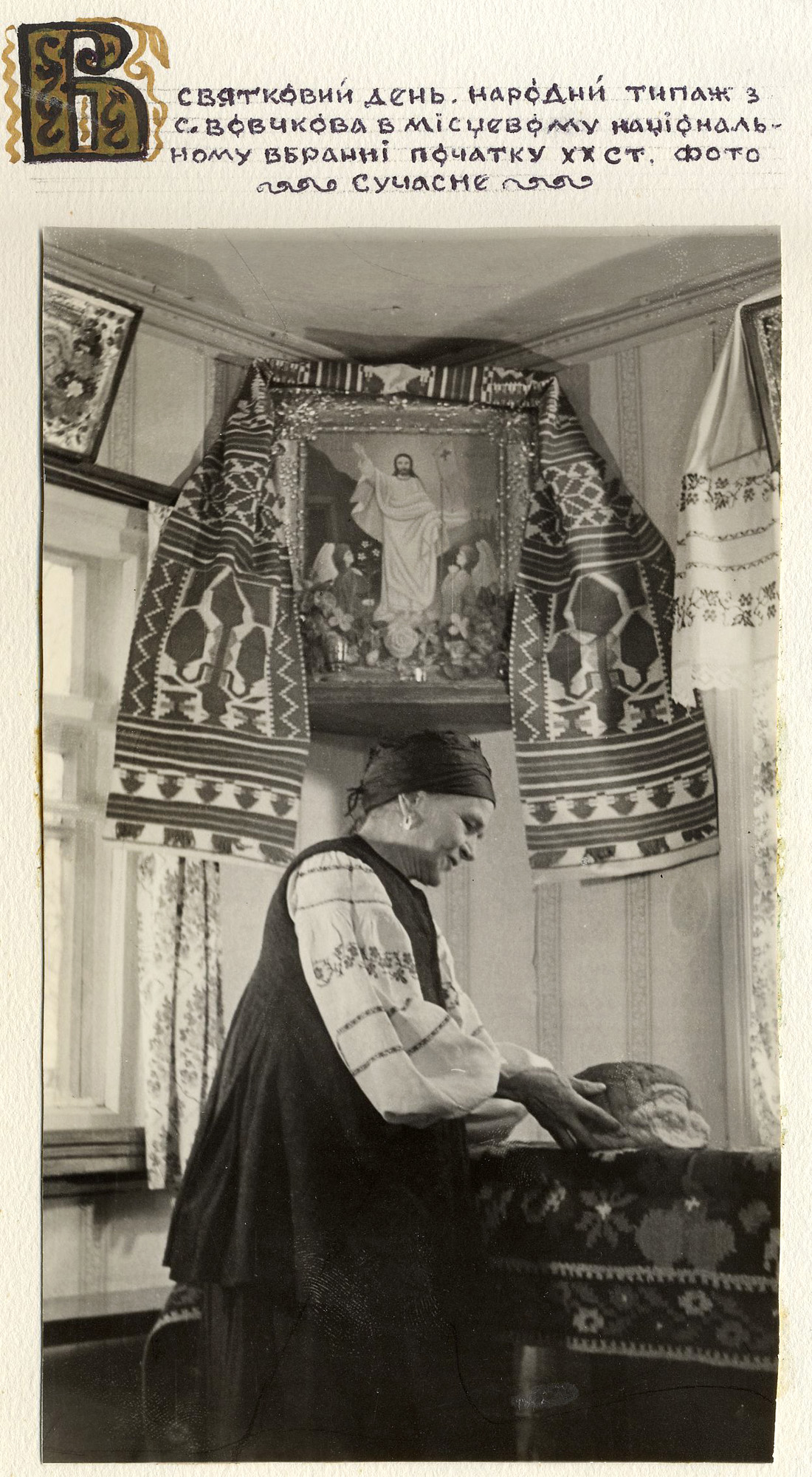 People communicate with them through prayer and honour them according to sviatsi. Many beliefs in the Ukrainian folk orthodoxy are of Byzantine and early Christian origin. People imagined that saints were patrons of  all spheres of economic and household activities. For example, the Saint Paraskevi of Iconium (popularly known as Paraskeva Piatnytsia) was aprotectress who encouraged typically feminine forms of work such as spinning, weaving, and sewing. She was honoured on October 28. On March 31, people honoured Saint Alexius - the patron of beekeeping (popularly known as Warm Oleksa); on this day beekeepers warmed up in the sun and opened their hives. Healing qualities were attributed to almost all saints. Of course, the first on this list was the Mother of God who was addressed in prayer as a mediator between man and God, Jesus Christ. Saints Cosmas and Damian (honoured on November 14), Saint Pantaleon (honored on August 9), and others were believed to be great healers. St. Anthony (there are several saints with this name; referring to Anthony of Padua, whose remembrance day is June 13) helps to find lost items. Despite the fact that in many traditions around the world Saint Nicholas was considered the guardian of travellers, sailors, and fishermen, in the Ukrainian rural tradition, he became the universal assistant for everything and was called a Wonderworker. The list of saints and their functions in everyday life according to sviatsi is lengthy, and this gave reason to call this phenomenon folk Christian polytheism. 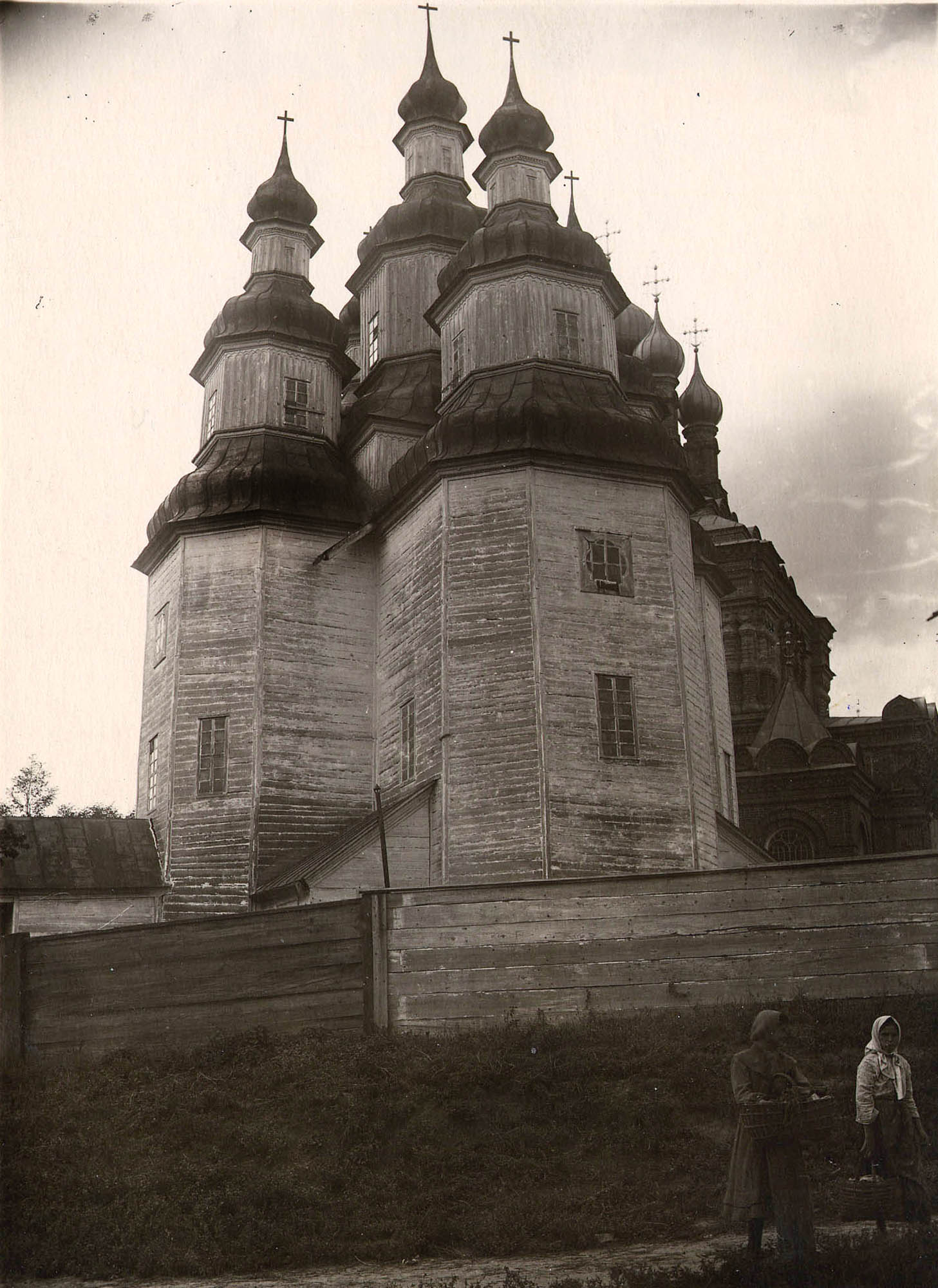 Photo. Author unknown. Wooden five-dome Church of the Intercession, built by the last koshovyi (leader) of the Voisko Zaporozhskoie, Petro Kalnyshevskyi, in 1767. In early 1912 it was transferred to Poltava where it burned down during the war in 1941. In the background, there is a newly built stone church.Early 20th century. Romny, Sumska Oblast. Collection of Ivan Honchar — ‘Ukraine and Ukrainians’ album, vol. 10 – ‘Slobozhanshchyna. Sumshchyna’ КН 12738/73

Long standing traces of folk Christianity include evidence of miracles, the appearance of icons, worship of springs, stones, wooden and stone crosses, trees, and caves, among others. Ukrainian folklore contains folk legends, legends, and carols about the universe and the creation of the world that have an explicit apocryphal, and sometimes dualistic, nature. The otherworld in the traditional worldview was imagined as a parallel world of the unborn (vyrii) and the dead where life continues after death; it is inhabited by angels and saints and you can meet the Virgin Mary and Jesus Christ there. On Rahmanish Easter (the 25th day after the Day of the Resurrection of Christ), people believed that the dead celebrated their Easter and if you put your ear to the ground, you could hear the Easter bells ringing in their churches. 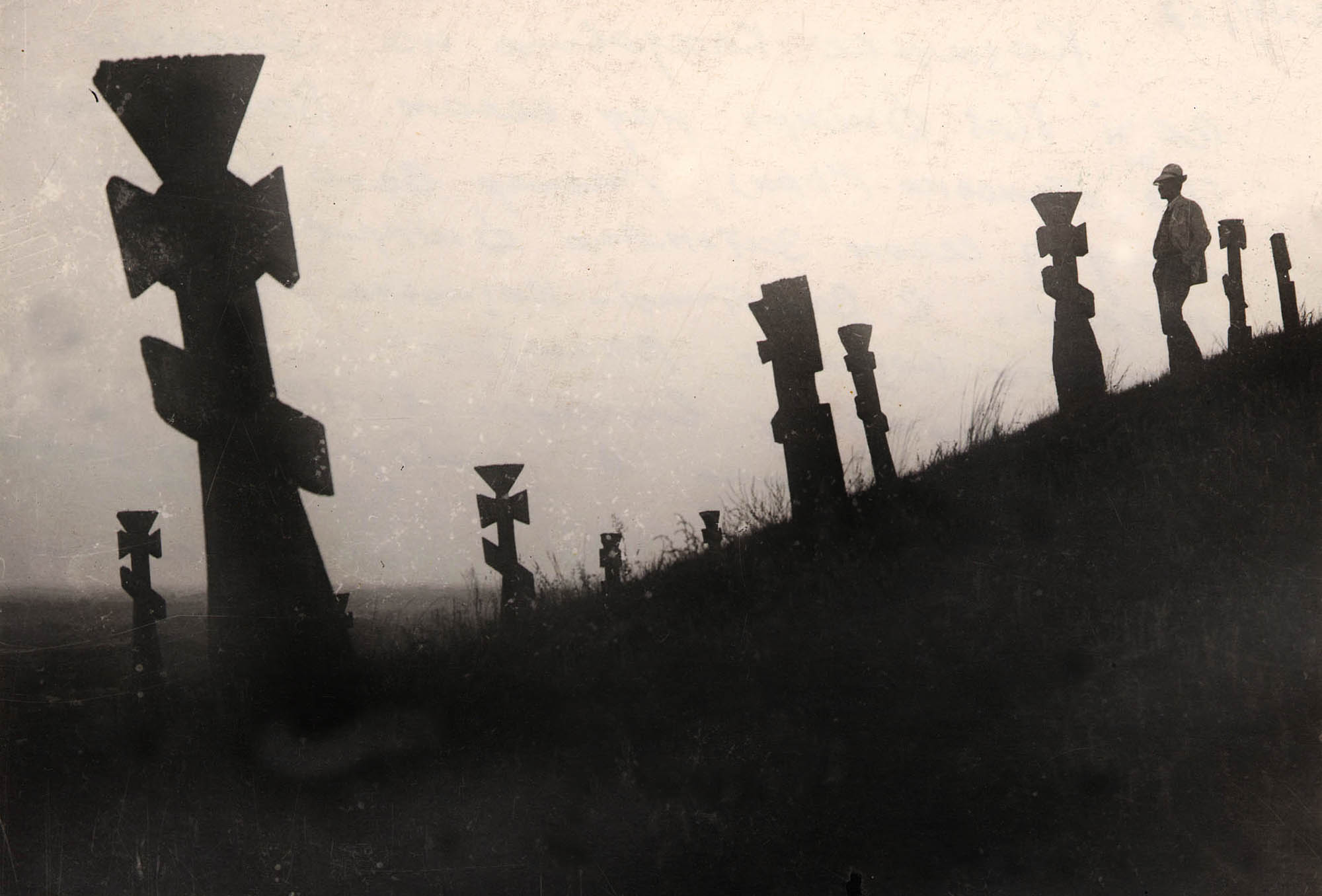 Photo. Author unknown. The old Cossack cemetery in the village of Vasiutyntsi, flooded by the Dnipro reservoir. 1906. Photo from the archive of Olena Trebinska. Collection of Ivan Honchar — ‘Ukraine and Ukrainians’ album, vol. 20 – ‘Unfinished’ КН-12748/18

Carriers of folk Orthodoxy, or at least practitioners, included the so-called ‘men of God’ (the poor, beggars, cripples, fools for Christ, klykushi (women afflicted with hysteria), psalms singers and itinerant kobzari and lirnyky). 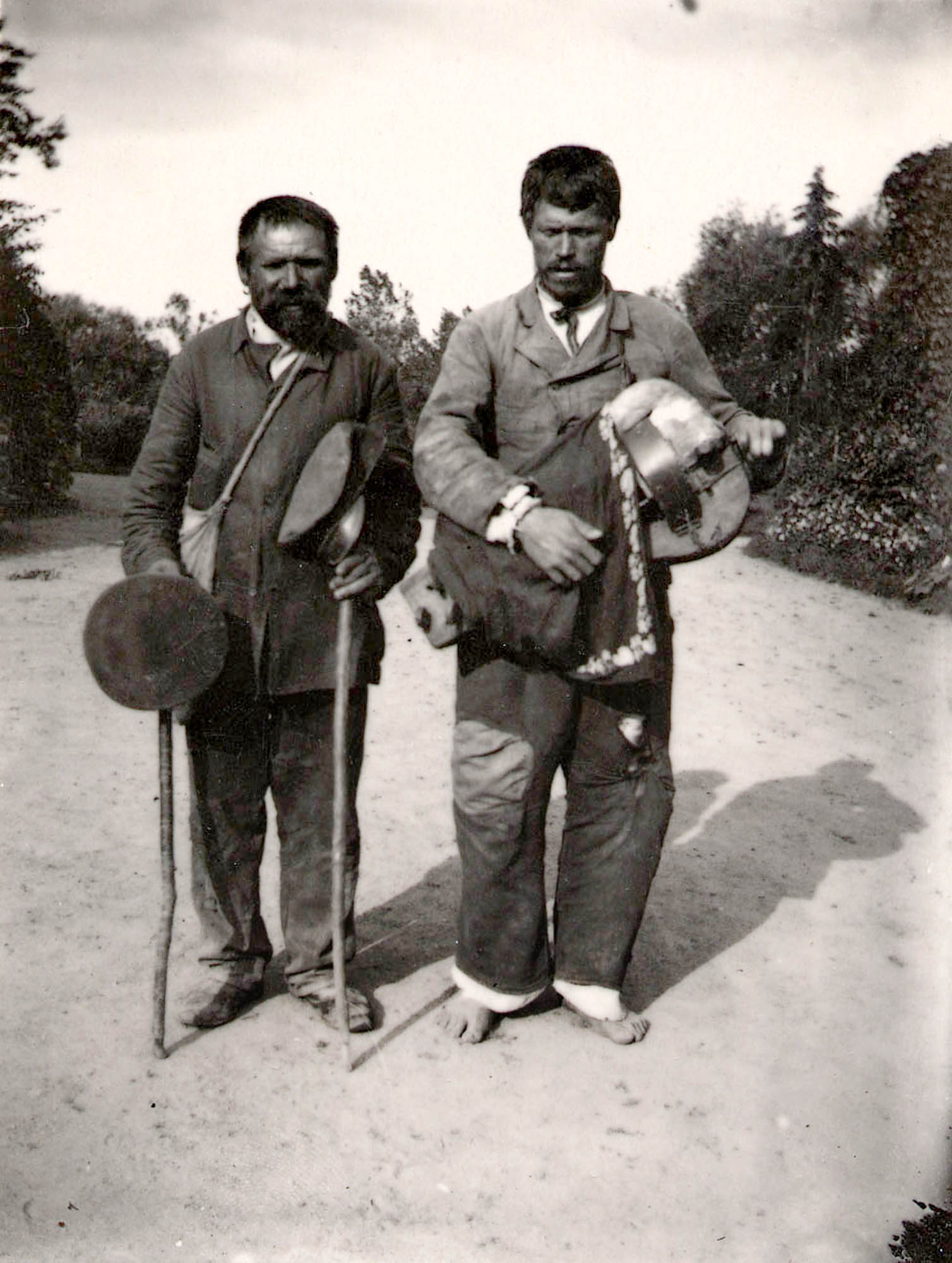 From the negatives of Victor Maslianykov (he son-in-law of the composer Mykola Lysenko). Lirnyk with a guide on the roads of Volodarsky powet. 1908 - 1909. Kyivshchyna. (Maslianykov Victor (1877 - 1944) - Ukrainian painter, graphic artist, the author of satirical drawings in  Shershen magazine. In 1910, he graduated from the Academy of Arts in Krakow. Husband of Kateryna Lysenko). Collection of Ivan Honchar — ‘Ukraine and Ukrainians’ album, vol. 4 — ‘Kyivshchyna Pravoberezhna’ КН-12732/110

Researchers attribute the emergence of the phenomenon of folk religion to the historical progress of Christianity in ancient Rus’. In this context, the Christianisation from the ‘top’ and the ‘bottom’ is distinguished because it happened in different ways. Christianisation from the  ‘bottom’, for example common people, proceeded both from ‘above’, by imparting new knowledge and introducing new rites through the Church and priests, and from ‘below’, by the dissemination of oral apocryphal traditions mostly by wandering monks, pilgrims, and traders. Beginning in the second half of the 17th century, this function was taken over by itinerant deacons and students of fraternal schools who became the creators of nativity plays and carols. As a result, they had a decisive impact on the development of the folk variant of Christmas. They also created a new genre within Ukrainian folklore — parody stories and songs about saints.