Folk medicine is an important component of a people’s ethnic culture. Based on the empirical knowledge of past generations and  folk experience, there are elaborate methods for the diagnosis and prevention of diseases, an understanding of their causes, and various treatments of plant, animal, and mineral origin. A special place in folk medicine belongs to the process of  treatment with  words.

Folk ideas about the causes of  disease can be divided into rationally explained (for example, a cold, food poisoning, cuts) and irrationally explained (these are the so-called sent, made, cast/poured) diseases. The first category of diseases was generally treated at home, using herbal, animal, and mineral remedies. Almost every housewife had her own  recipes for domestic remedies.

Folk therapies were primarily composed of herbal treatments. Our ancestors developed an intimate relationship with the environment and gradually learned to find natural cures for various diseases, and developed rules for the collection, drying, storage, and use of medicinal herbs. People were well aware that active substances are produced and accumulate in plants at certain periods of their development; therefore, they harvested them at a specific time. Medicinal herbs were harvested based on which part of the plant contained  healing properties — the root, leaves, or flowers. The leaves were usually collected before the plant flowered;  parts that grew underground (roots, tubers) were collected in autumn or spring. Bark, on the contrary, was collected when juices began to circulate through the trees in the spring, and seeds and fruits were collected as they ripened. It was recommended to collect flowers as soon as they bloomed. 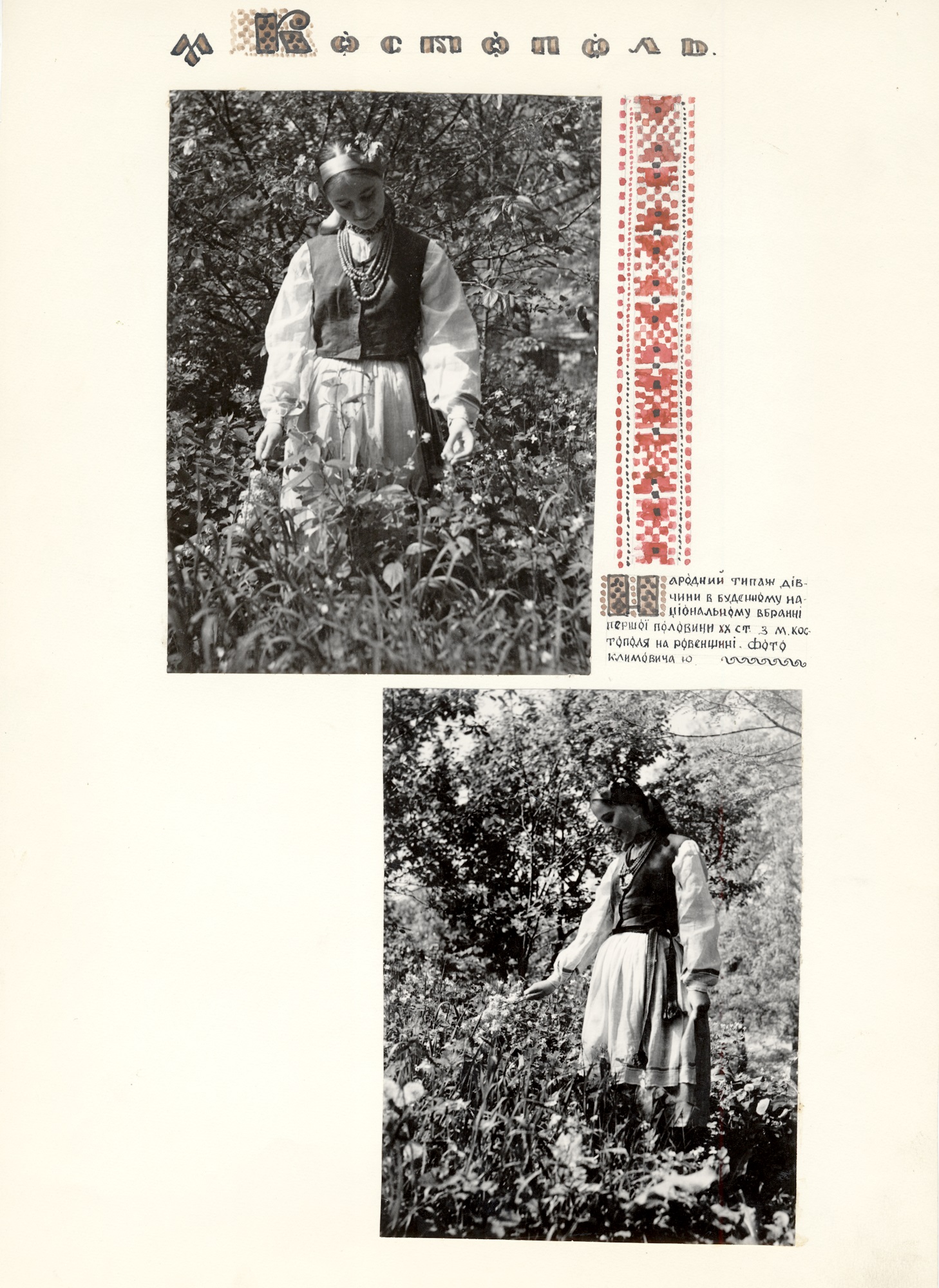 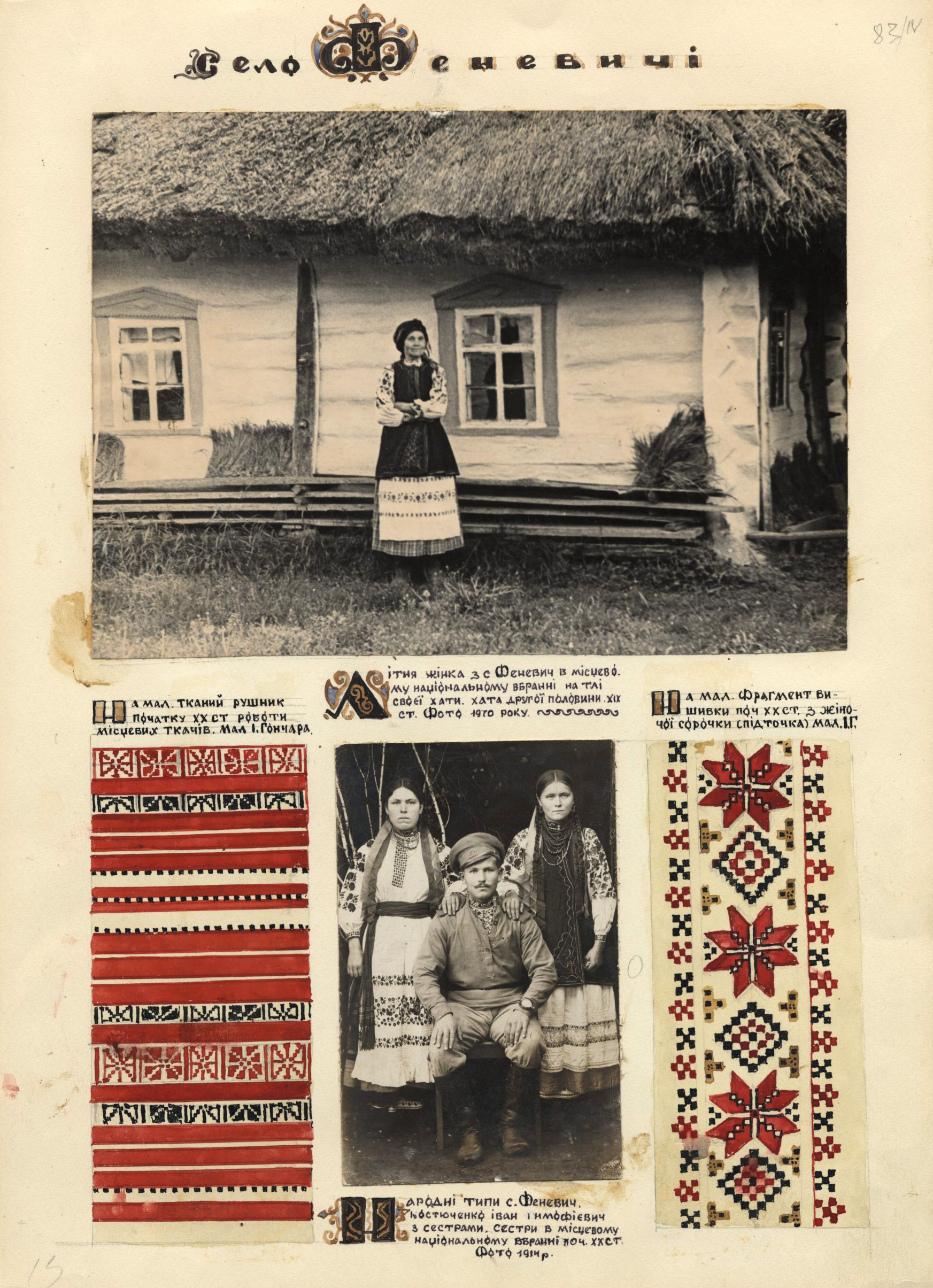 An elderly woman from the village of Fenevychi, Ivankiv raion, Kyiv Oblast in local folk attire, standing against her house. The house was built in the second half of the 19th century.1970. From the historical and ethnographic art album of Ivan Honchar Ukraine and Ukrainians, vol. 6, Northern Kyivshchyna KN-12734/21

In addition to herbal potions, Ukrainians widely utilized the healing properties of trees in their treatments. Especially popular were birch, oak, walnut, viburnum, pine, alder, and willow. For example, birch sap and tinctures of birch leaves in water or vodka were used as cough medicine. A vodka tincture made from  birch buds was rubbed on the skin for rheumatic pains and as a wound-healing agent. The healing properties of oak, especially its bark, have long been known. In particular, it was gargled in diseases of the oral mucosa and to treat a toothache, and taken orally as an infusion for disorders of the stomach, intestines, and bladder.

Vegetables were widely used in the medical practice of our ancestors. Among them, garlic and onions were the most prominent and were primarily used against the common cold. Other vegetables were also widely used for medicinal purposes such as potatoes, carrots, beets, and cabbage. Grated raw potatoes were applied to abscesses, wasp or bee stings, calluses, burns, and for back pain; hot potatoes were used to warm up the body in case of a cold and were applied to the legs and chest; and people inhaled the steam from hot boiled potatoes. 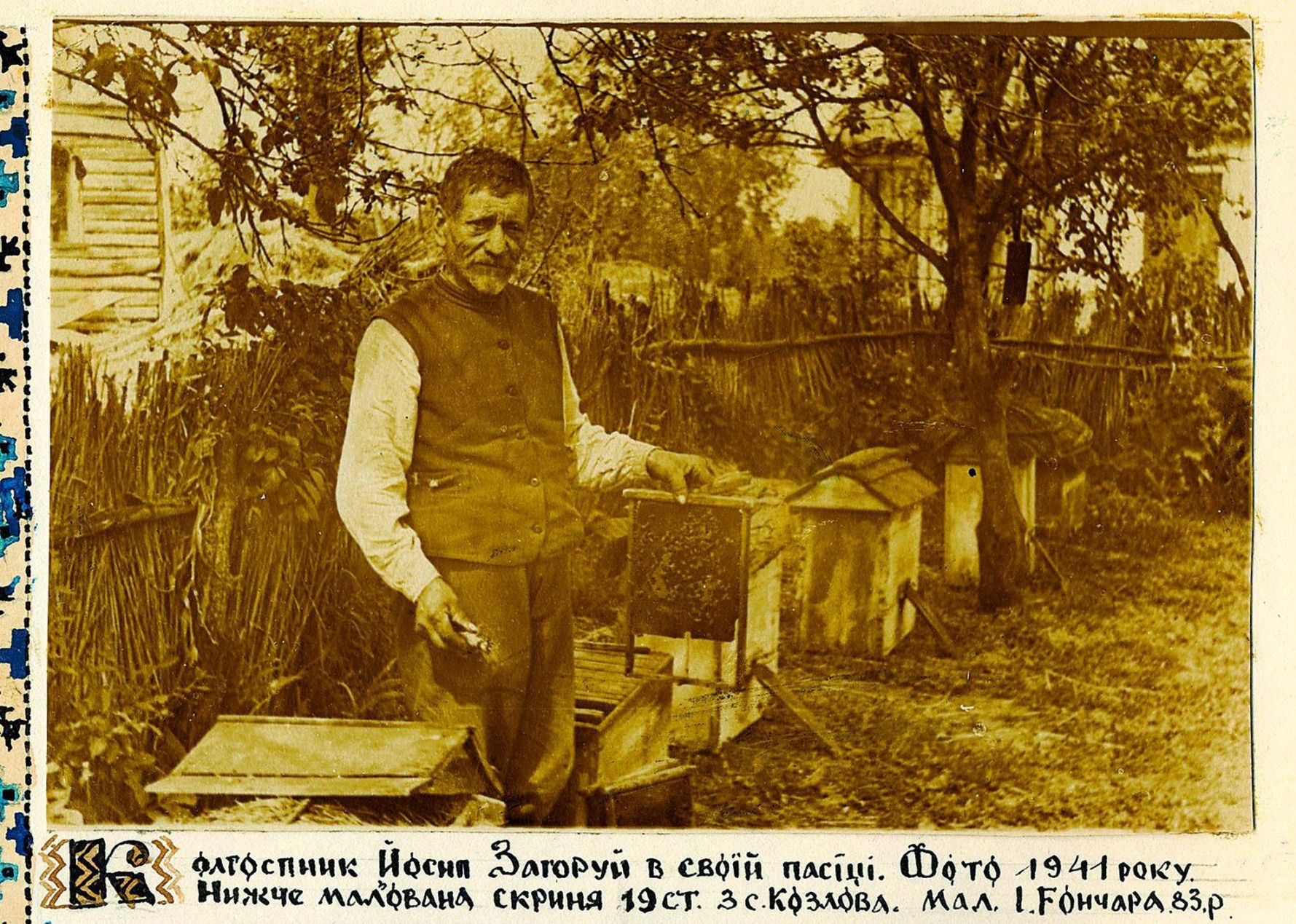 In the regions of Ukraine where harvesting was predominant (primarily Polissia and the Carpathians), wild berries (raspberries, strawberries, blueberries, and cranberries) and mushrooms also had an important place in local medicinal traditions. For example, blueberries were used to treat diarrhoea, kidney stones, anaemia, and to decrease the acidity of gastric juices. Dried white mushrooms were used to heal wounds, abscesses, and scratches. To do this, the mushrooms were soaked in water or milk and applied to the wounds.

Remedies of animal origin were also widely used in folk medicine. The recipe for infusing hot milk with various additives to treat a cold is well-known: milk would be infused with butter and honey, with egg and butter, with honey and pepper, among others. Animal fats (pig, dog, badger, goose, and others) were also used in various treatments. They were mainly rubbed on the skin to treat a cold and served as a remedy for wounds and abscesses. Among the drugs of mineral origin, the most commonly used were red clay and salt. Clay was used to make compresses for joint dislocations and bruises. Salt was applied to the throat and nose as hot compresses to treat colds.

The second category of diseases, the so-called ‘sent/cast’ diseases, were not treated at home but handed over to professional znakhari (‘healers’). They healed diseases through special magical rites, rituals, and spells.

In general, Ukrainians believed that disease was a substance composed of negative energy and entered the body for various reasons. For example, it was ‘cast’ on water or vodka, and then a person was given a drink. It was believed that evil people could ‘plant’ diseases onto cursed things for harmful purposes, ‘pour’ it, and let it fly in the wind (whirlwind). Those who came upon it fell seriously ill for a long time. That is why healers traditionally expelled, burned, poured out, pumped out, degraded, transmitted, and frightened the sent diseases. For example, one of the most common treatment methods for removing disease from the body was rolling on a chicken egg (most often) or bread crumbs / bread ‘balabushky’ (bread balls). The process occurred as follows: the healer rolled an egg or ‘bread balabushky’ on all parts of the body from the head to the feet. At the same time, they were casting spells. After the rolling component was completed, the egg was usually broken into a glass of water and then given to a dog for it to ‘bark’ the disease out, or poured out ‘somewhere where people do not go’. 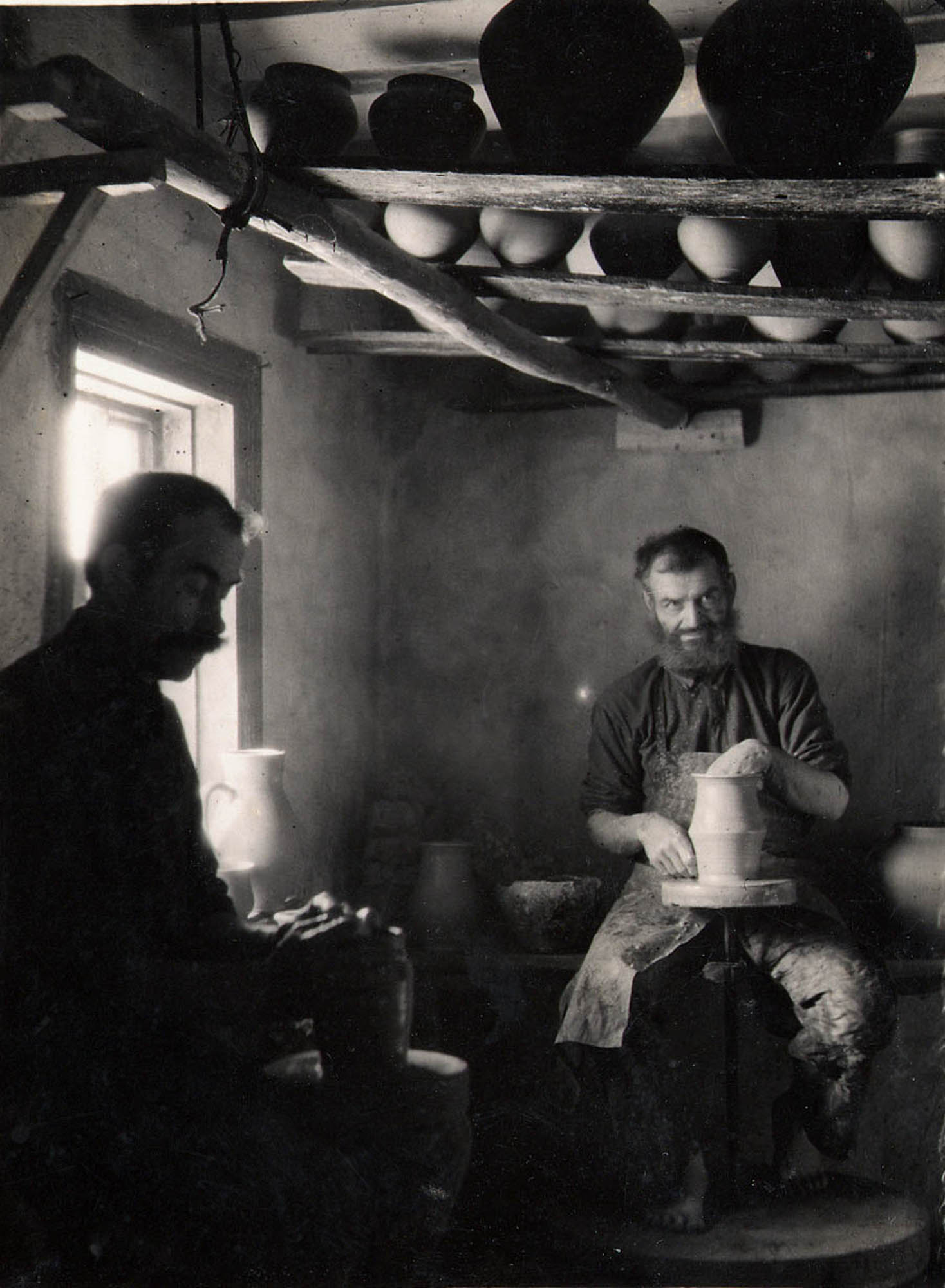 In the treatment of these diseases, healers widely used various handy tools: nepochata (‘magic’ water collected before sunrise); medicinal herbs, a knife, salt, mak-vydiuk (field poppy also known as samosiika), as well as cult items consecrated in the church (cross, icons, candles). The colours of the objects were also of special importance to the treatment; red and black colours dominated. The former was used to treat irritation of the superficial layers of the skin (skin reddening and itching), and the latter during the treatment of epilepsy.

The act of magical healing always consisted of spells and incantations  that were performed over food and water that a person had to consume. In this way, people were allowing the magic words to pass through them through the actions of  ‘swallowing’ and ‘drinking’. Thus, food became a ‘vehicle’ to  deliver words to the ‘recipient’.

According to folk knowledge, in addition to  the znakhar (‘sorcerer’) and znakharka (‘sorceress’) — those who healed from diseases — witches and warlocks, who ‘cast’ diseases, were also involved in human healthcare. The former acted with the help of knowledge and strength granted from God.  They healed not only physical and psychological illnesses, but also helped to solve various financial, household, and family problems. Witches and warlocks existed as folkloric  motifs. They were connected to evil spirits by ‘having sold their souls to the devil’ and were attributed with  causing evil, sending illnesses, disasters, and severe physical and mental disorders. It was believed that witches and warlocks could turn people into animals (usually wolves); cursed couples with infertility; caused troubles between people; ‘spoiled’ cattle; and ‘created’ death, among other things.

According to popular belief, representatives of both categories could be innate or trained, but the former were considered to be more powerful. It was believed that one could be born with a propensity for witchcraft and sorcery; the day, time, and even the minute of a child's birth were important because they determined its further life. Monday was considered a Znakhar day. It was believed that a child born on this day could become a healer in the future. However, there was also a belief that sorcery was transmitted mainly ‘by blood’ and ‘by birth’; one’s own desire to be a healer was not enough, you needed to have the appropriate abilities. Special abilities were given to  ‘borderline’ children: the first and the last born in the family.

When training to be a healer, a student received only one chance to learn from their teacher. If he did not succeed, he was considered incapable of sorcery. There was a belief that knowledge would be better mastered if a student held his teacher's hand: if the teacher was  a woman, then the student should hold her skirt. During training, teachers followed the rule that they could only pass their knowledge down to a person younger than themselves, otherwise, it would not prove helpful. In addition to the practice of teaching medical knowledge within a family line, there have been cases when it was passed  on to another individual to repay a  favour, or express gratitude. This usually occurred in the event a healer was unable (due to old age or illness) to perform a healing rite on their own.

Folk healers did not demand any payment from their patients for their services. Instead, their fee was determined by the amount of gratitude the patient had for the treatment itself. Without gratitude, the treatment would not help. Healers were paid money or thanked with flour and bread, natural products, and linen products.

According to folklore, witches and warlocks needed to periodically ‘give’ diseases to someone, even without the desire to do so. When ‘such a time’ came, a person had absolutely no control over oneself and could ‘do it' to anyone, even relatives. For this, warlocks and witches were sentenced to a long and hard death; however, all of them lay dying, tormented, screaming, unable to die. There were several ways to ‘help’ them die. The most common was to disassemble (‘remove’) the roof of the house or put the dying person on their doorstep. It was also believed that a witch and a warlock should pass on their knowledge to someone before death because sinful words ‘kept’ them alive and prevented the soul from leaving the body. They would try to pass on their craft to anyone, even the first person they met. It was believed that an ordinary person could obtain all the necessary knowledge a witch or warlock possessed by just holding the hand of a dying witch or warlock or taking any object from their hands. 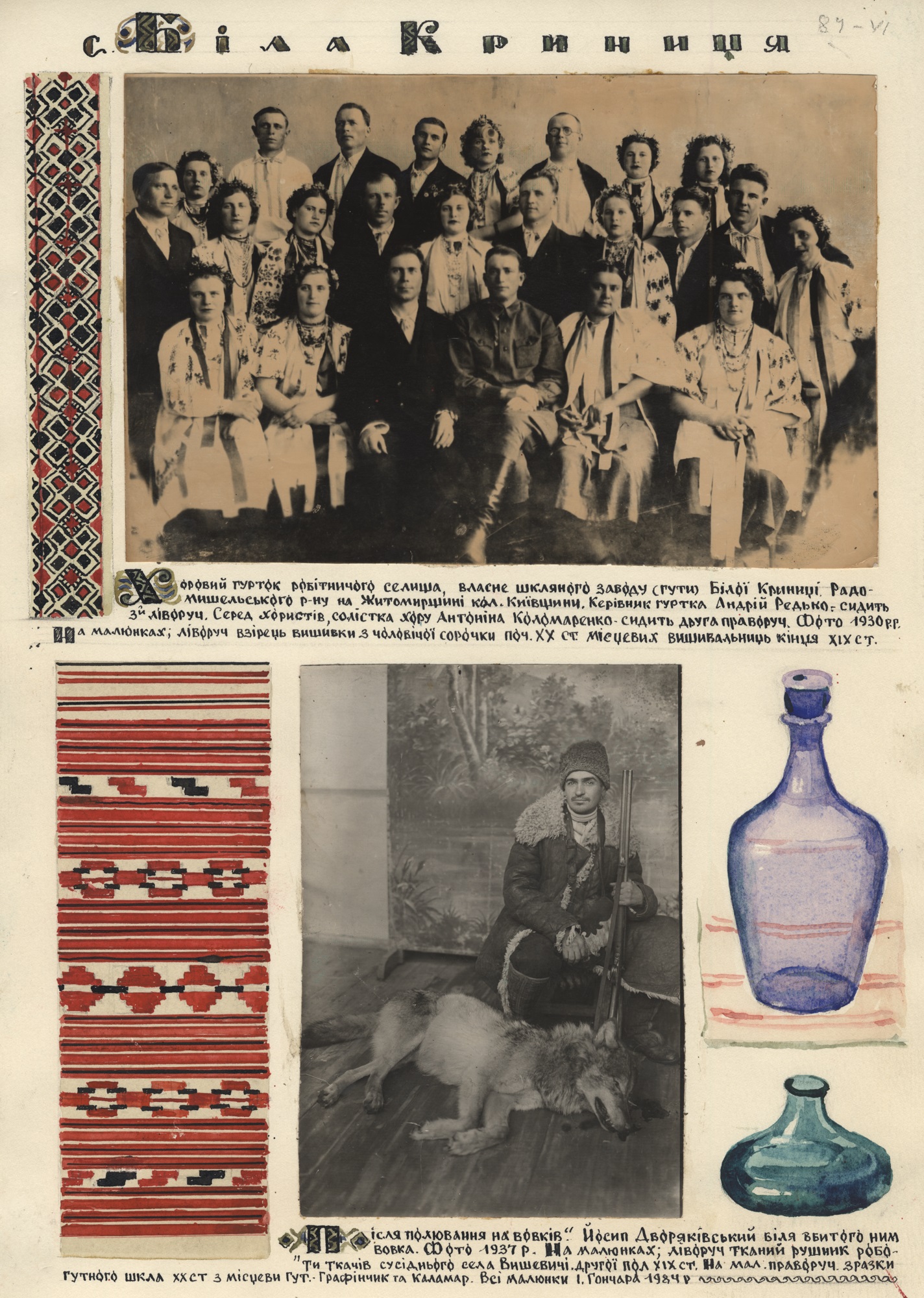 (hunter) ‘After hunting wolves’. Joseph Dvoriakivskyi near the wolf he killed. with. Bila Krynytsia, Rivne raion, Rivne oblast. Photo of 1937 from the historical and ethnographic art album of Ivan Honchar 'Ukraine and Ukrainians', Volume 13 ‘Volyn’, KN-12741/10

In general, the tropes  of sorcerers and witches had ambivalent features in the folk worldview system. In folk tales, the former could easily be suspected of witchcraft, and the latter often helped people in need.

In traditional society, baby-povytukhi (‘midwives’) also known as baby, or baby-puporizky comprised a separate category of people associated with folk medical practices. This was a ‘pure’ category of women both physically (it was considered that obstetrics should be practised by post-menopausal women), and spiritually (her activity was, according to rural beliefs, a godly affair).