In traditional society, there existed folk knowledge and practices pertaining to cooking that included the following categories: the primary techniques for processing food, the everyday and holiday menu, cooking techniques, the correct sequence of steps, the proportion and combination of ingredients, cooking temperature and duration, how to cook on the road, managing the oven/open fire, serving, looking after tableware, and table etiquette, among others. This experience was passed on through the family line mainly among women, from generation to generation: from grandmothers, mothers, and aunts to daughters, granddaughters, nieces, and more. From an early age, girls were involved in food processing and food production. From year to year, her workload increased and knowledge expanded. Once girls reached the age of majority, they already had rich knowledge and skills to apply when they got married. The transmission of culinary knowledge also occurred through a synchronous process. During large dinners, ritual ceremonies, weddings, and other feasts that were usually cooked by a group of women, women and girls exchanged experiences and recipes. 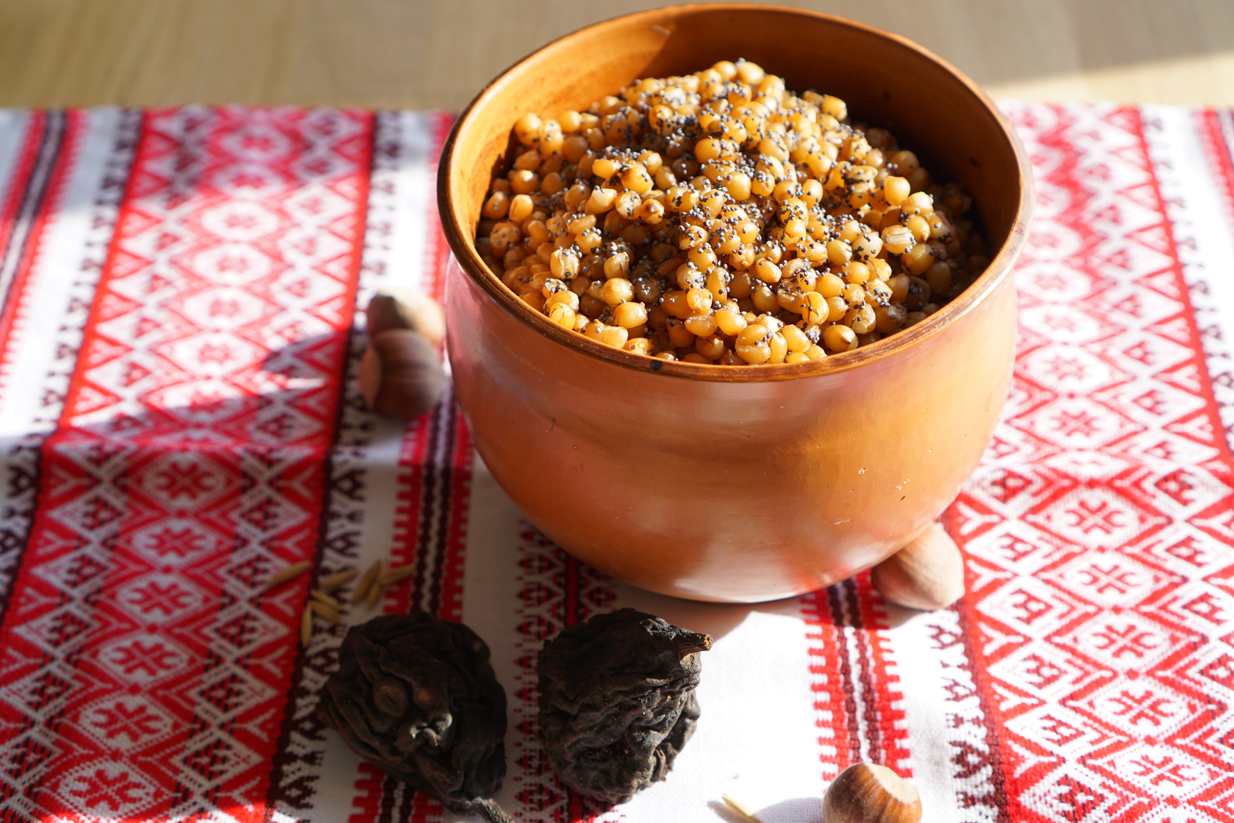 Girls who served as housemaids, servants, or kitchen helpers for wealthy families that lived on estates or in cities learned new cooking techniques and recipes and were able to later implement them in their own homes.

The names of Ukrainian dishes are diverse in their origin. They can contain the following information :

Traditional Ukrainian homemaking culture was based on agriculture. This explains why many dishes contain cereals: barley, millet, rye, oats, and wheat. They were used to make bread and porridge, and cook kuleshi. Traditional cuisine is generally associated with lengthy cooking processes. This is especially true for cereal dishes, in particular kvasha and teteria. Before it was cooked, the grain was fermented by adding malt (germinated grains of barley or rye). The  dish acquired a sour-sweet taste from the fermentation process. 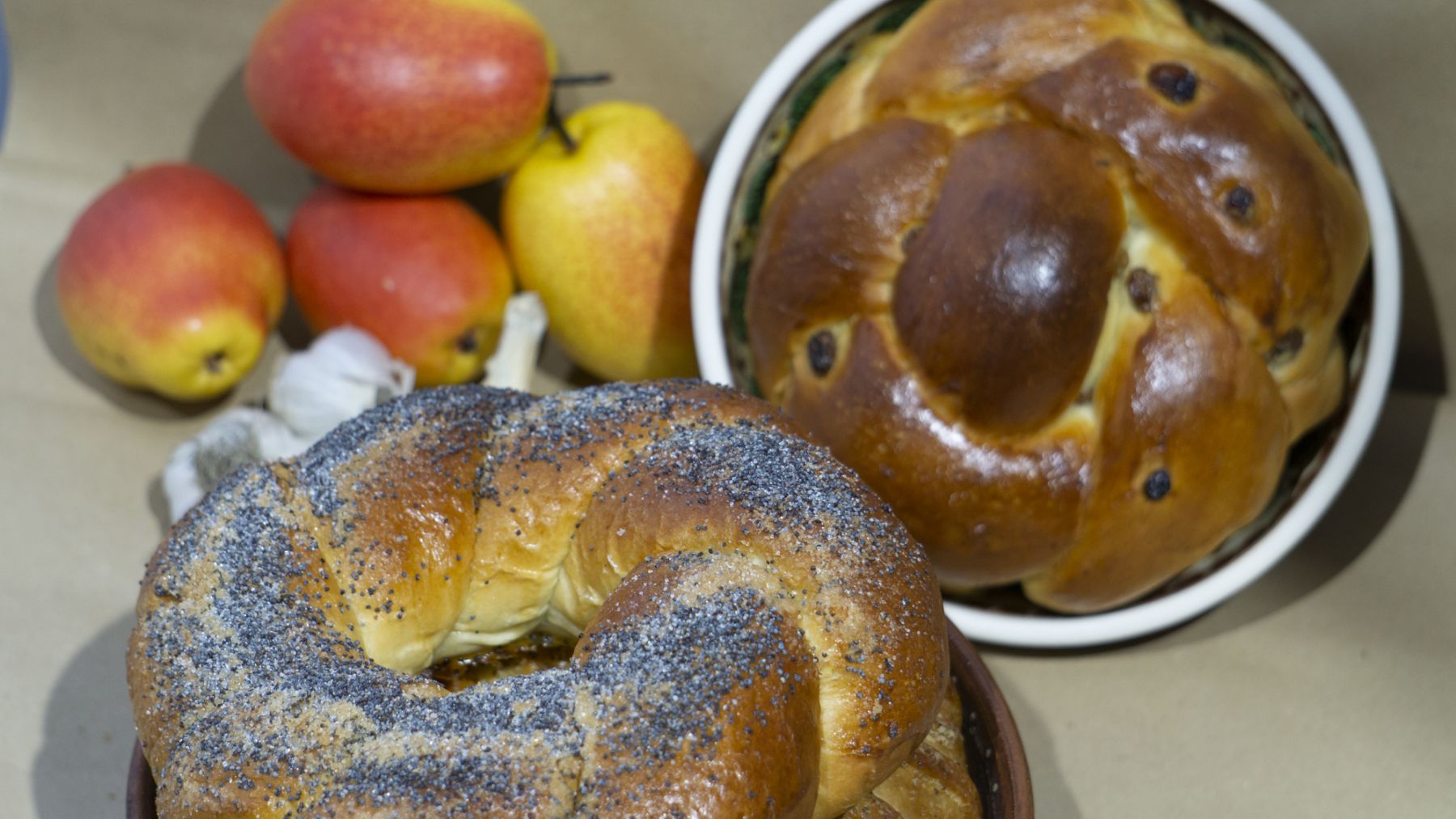 By the mid 20th century, bread composed the nutritional basis for Ukrainians. In the countryside, it was baked in ovens by women. The oldest type of bread is unleavened, but was later replaced by uchynenyi — so-called sourdough bread. Before the advent of yeast, people used sourdough derived from hops, germinated barley, and rye to bake bread. Homemade bread was eaten as a snack with various dishes; depending on the season, this included cucumbers, watermelons, onions, radishes with oil, and lard.

Traditional dishes were favored first of all for their nutritional value, and second for their shelf life. That is why bread, cereals, and legumes with the addition of oil or animal fats have long been important nutritional components of traditional Ukrainian diets. Cereal and flour-based dishes are the oldest category of the traditional Ukrainian menu and are firmly entrenched in ritual: Ukrainians cook kutia for Christmas, bake paska for Easter, and korovai for weddings. Porridge had an important role in old initiation rites: porridge ‘was beaten’, buried in a pot in the ground, or divided between participants. 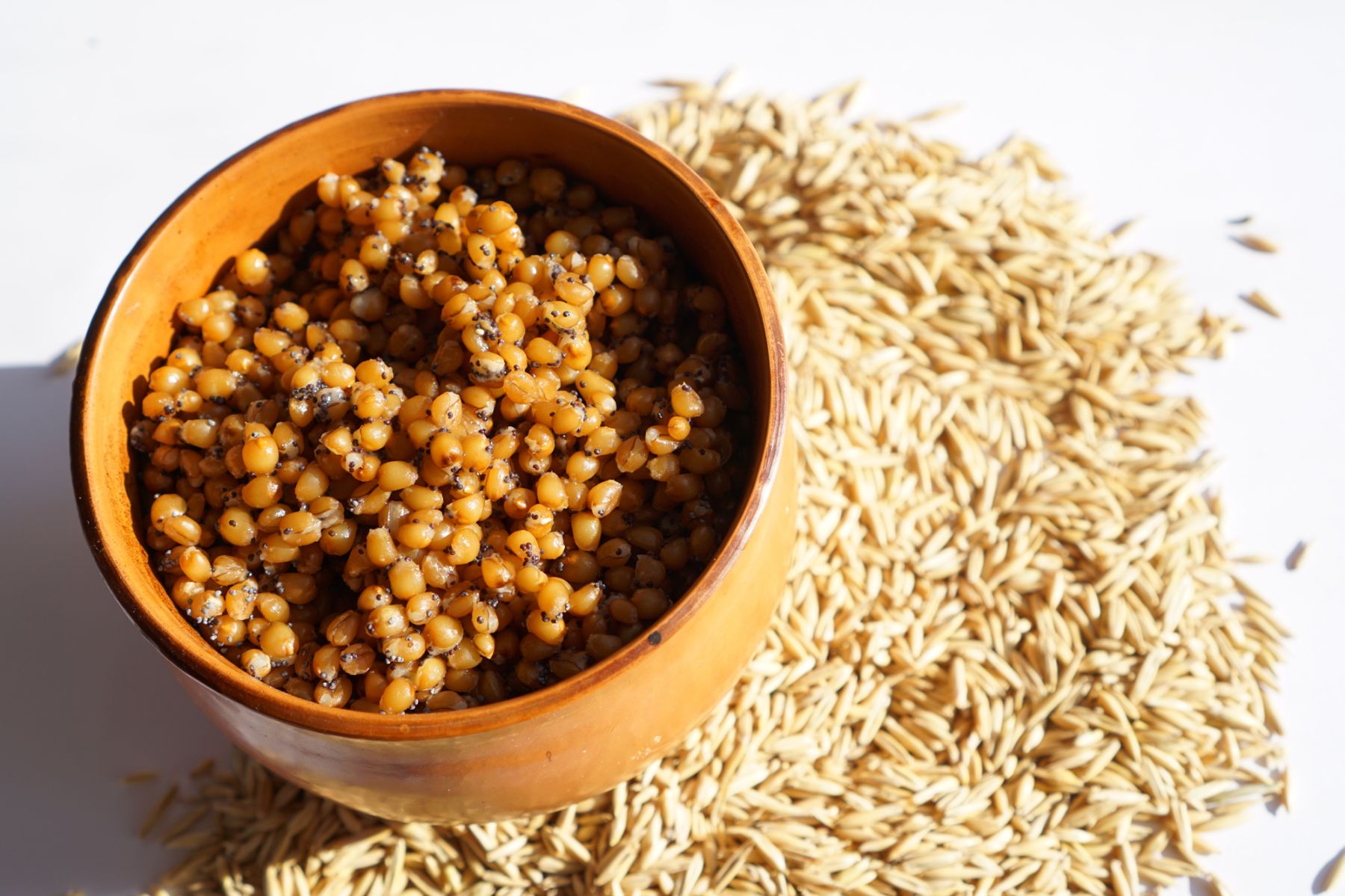 In the past, most peoples’ daily menu was composed of  porridge (eaten with milk, shkvarky (‘cracklings’), or poppy, rye, flax, or hemp olia (‘oil’) dressings) and also vegetable, mushroom, and fish iushki (‘soups’), borshch, and kulish. In the 19th-20th centuries, cereal dishes gave  way to potato and flour based dishes. Due to their nutritional value and relative ease of storage, potatoes gradually became the ‘second bread’ in the culinary practice of Ukrainians.

Ancillary to agricultural activities was domestic livestock (mostly dairy) and poultry farming. Dairy products (primarily from cow's milk, in some regions from goat's and sheep's milk) are an important component of traditional Ukrainian food. There is a rich history surrounding how products were cooked from sweet and sour milk. These products included syrovatka (‘whey’), skolotyny (‘buttermilk’), maslo (‘butter’), riazhanka (‘fermented milk’), kolotusha, huslyanka, vershky (‘cream’), and molozyvo (‘beestings’). Kysliak was the most popular sour milk drink and was  consumed with bread, baked potatoes, and onions. It was also used to make cottage cheese and sour cream. The latter is important because of its multifunctionality: it was used as dressing for borshch, vegetable and mushroom soups, varenyky (‘dumplings’) both with salty and sweet fillings, salads, it was used to stew meat and mushrooms, and to bake fish. 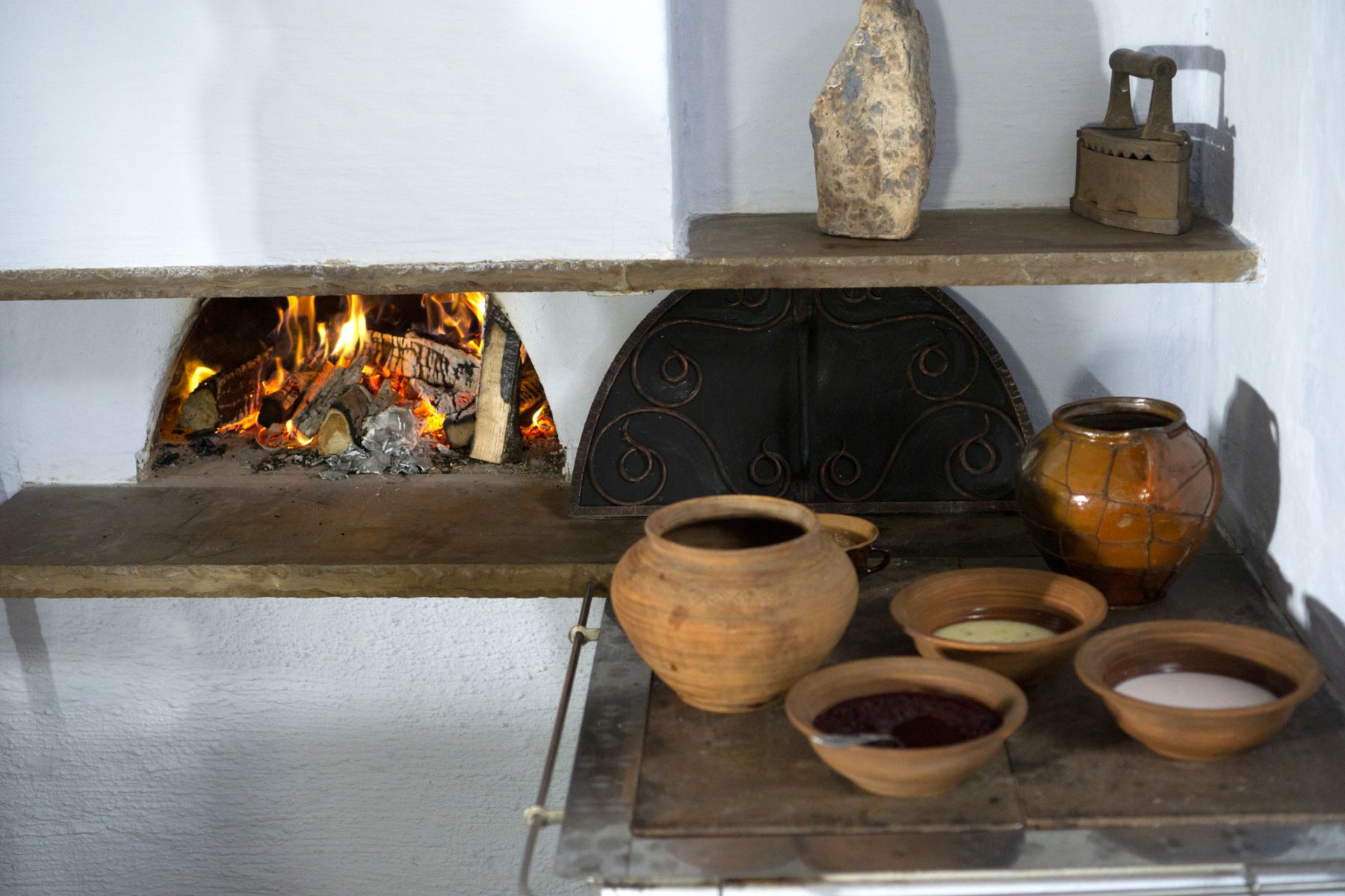 O. Braichenko. Ternopilshchyna
Domestic meat and poultry dishes were mostly consumed as part of the holiday or Sunday menu (in affluent families) and included a baked pig,  pechenia (‘roast’), kruchenyky, roast chicken, sichenyky, and kholodets. However, lard was often present in the daily diet: it was used salted as a snack with bread, pickles, onions, mustard, khrin (‘grated horseradish’), and garlic,eaten in the form of shkvarky, and it was used to flavour lean plant and grain dishes. Sausages, baked or smoked, salted cheese, roasts, hams, and kholodtsi were prepared for the holiday table. They were also cooked for Christmas, Easter, the Church Saint’s day, and weddings. In the past, Ukrainians consumed a lot of river fish and crayfish, most often cooked as fish soup.
Until the 19th century, namely before the emergence of industrial sugar production from the sugar beet, honey and fruit served as the primary sweeteners. Raw fruits were consumed sparingly, instead they were dried and then boiled in uzvar, and boiled fruits were stuffed into pies/buns. 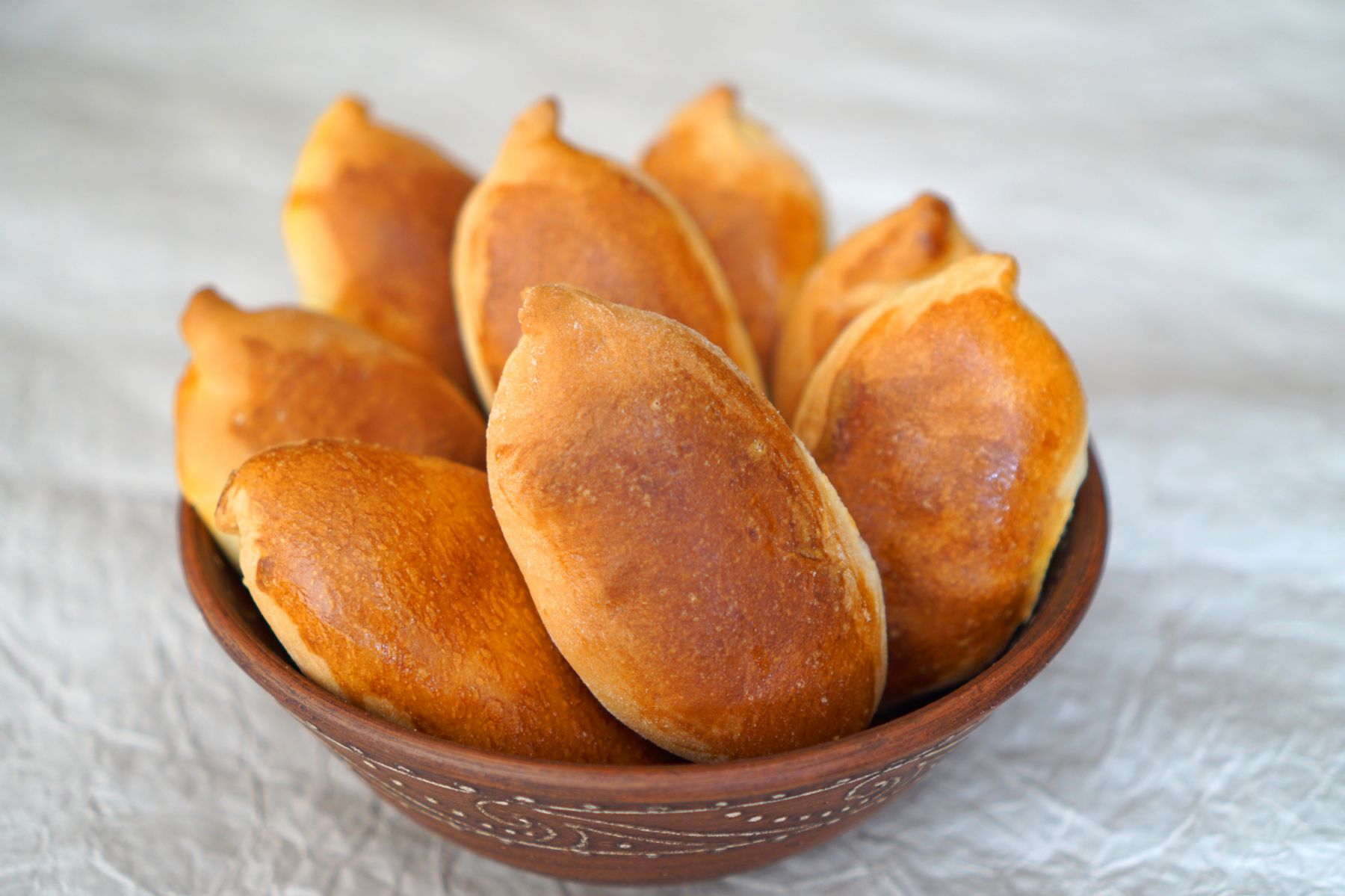 Ukrainian dishes are often described  seasonally; this tendency is easy to trace with the example of borshch. In the spring, green borshch was cooked from the tops of young beets, carrots, the first leaves of dandelion, sorrel, goosefoot, and other plants. In the summer, kholodnyky (cold borshchi) soured with whey became popular. Closer to autumn, thick borshchi or beet kvass with roots and groats prevailed. On winter days, borshch was cooked with meat or bone.

The seasonality of the culinary tradition and lack of long-term storage facilities,  prompted the development and improvement of technologies for drying, fermenting, salting, and smoking fruits, vegetables, meat, fish, mushrooms, and berries. Cabbage, cucumbers, beets, and apples were fermented and eaten in winter; fermented cabbage was consumed with an oil dressing or stewed with  meat, or sausages. To preserve meat and lard for long periods, it was salted in special bodni (‘barrels’), or stored in brine with the addition of nitrate. Fish was dried or salted, but, unlike today, salted fish was not consumed as a snack and  was rather considered an ingredient for soup or borshch. 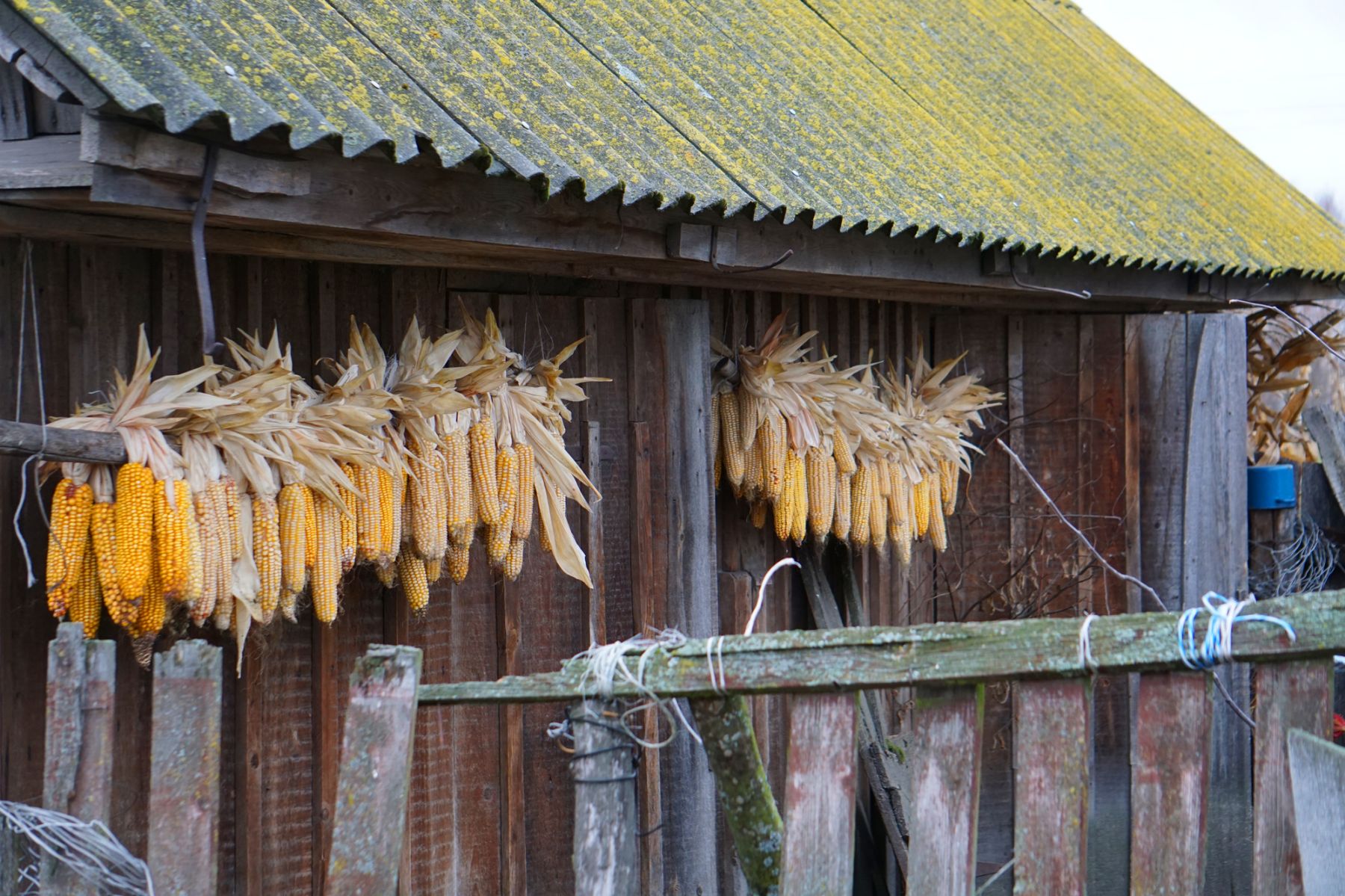 O. Braichenko. Corn under the roof. 2015. Chernihivshchyna
The quantity of food consumed depended on the season and farmers’ scale of fieldwork. Breakfasts could be the same in size and calories as full dinners, as often breakfast consisted of leftovers from dinner. This was due to the high physical activity of agricultural workers. During mowing and harvest season, meals were eaten in the field and could consist of a hot dish (borshch, porridge, or kulish), or more often simply bread, onions, lard, cucumber, and a pot of milk. 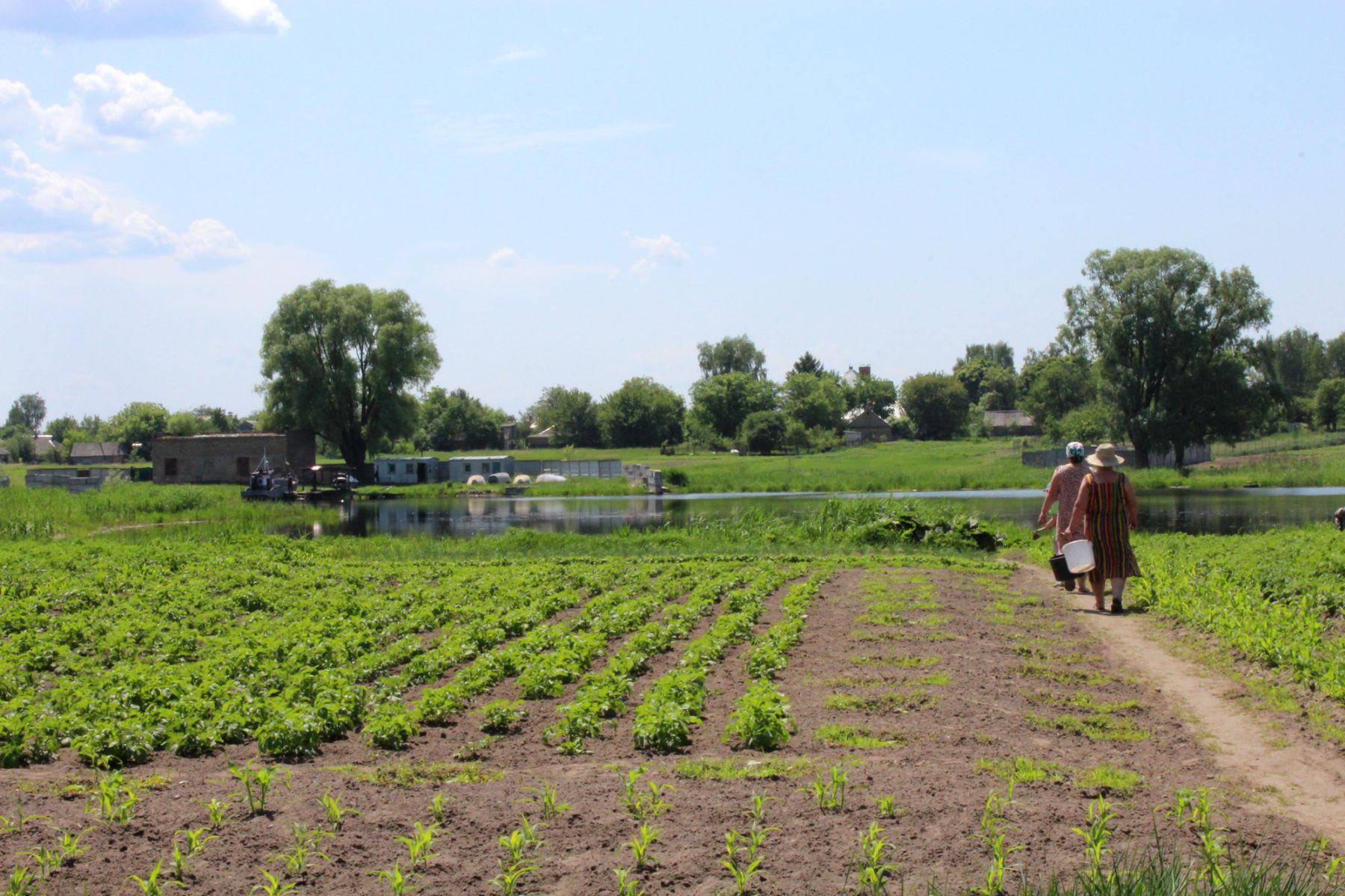 Weekday dinners, meals on Sundays, and holidays, were reserved for family time; people ate slowly, discussing and resolving family matters. According to patriarchal tradition, the father sat ‘at the head’ of the table and had the right to the first spoon (when it was customary to eat from one bowl), or he was the first to be served (when people began to use individual tableware). The head of the family also received the largest portion of food as he was the main breadwinner, and did the hardest physical work, which was highly valued. The oldest man in the family performed certain ritual functions that pertained to food including: bypassing cattle and apiaries with kutia for Christmas, throwing a spoon of kutia to the ceiling, performing the first and the last yearly rite of going to the field with ceremonial bread, and dividing a korovai at a wedding. Heconducted important negotiations concerning the purchase of property, grain, and svatannia (‘courtship’) and put mohorych on the table to guarantee the agreements.

In the past, kitchen utensils included: devices for cooking in the oven (oven fork, poker, shovel); utensils for cooking and kneading dough (pots, cast iron cauldrons, various types of bowls); cutlery was once represented only by a spoon; and containers for storing food (jugs, pots, mugs). In each house, the people had at least a few units of master pottery made by potters. Painted, colourful dishes were exhibited in the cupboards and were especially appreciated.